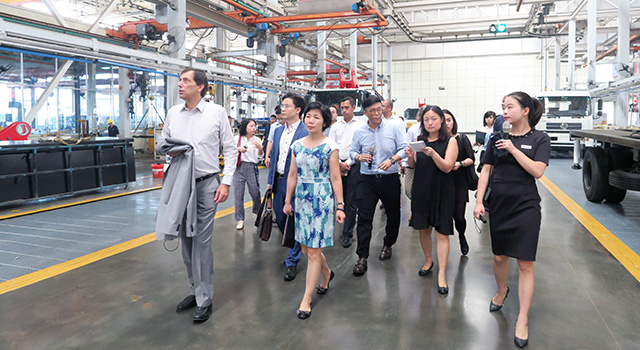 A delegation from the Permanent Secretariat of the Forum for Economic and Trade Co-operation between China and Portuguese-speaking Countries (Macao) visited the cities of Zhoushan in Zhejiang Province and Changsha in Hunan Province between September 21 and 25, to attend a series of economic and trade events. The aim was to strengthen cooperation between Portuguese-speaking Countries and provinces and cities in Mainland China, to increase exchanges in several fields, such as tourism and fisheries, and to promote industrial capacity cooperation.

On that leg of the trip, the delegation also visited the Zhoushan National Pelagic Fishery Base and took part in an exchange session at the centre. The head of the institution gave a brief presentation about its development and future strategic planning. It is expected that, through the visit, both sides will be able to enhance their mutual understanding and friendship and build a platform for a more in-depth interaction. It is also hoped that pragmatic cooperation can be promoted in areas such as fish farming in a marine environment, fish processing, offshore fishing and technical support. The representatives of Portuguese-speaking Countries in the delegation also conducted exchanges with the head of the Zhoushan National Pelagic Fishery Base.

During the visit to Hunan, the Permanent Secretariat and the Department of Commerce of Hunan Province jointly organised the “Promotional Session on Industrial Cooperation between Hunan–Macao–Portuguese-speaking Countries”. Approximately 80 representatives from local enterprises involved in, respectively, fisheries, import and export, technology and research, biotechnology, electricity, agricultural machinery, railway transportation, aviation, construction materials, cultural industries and human resources, took part in the session. Also attending were the representatives from the China and Portuguese-speaking Countries Co-operation and Development Fund Management Corporation; the Macao Association for Studies of the Belt and Road; and the Timor-Leste Business Association.

During the session, Mr Luo Shuangfeng, Deputy-Director of the Department of Commerce of Hunan Province, gave a presentation about the economic and investment environment in the province. The China and Portuguese-speaking Countries Co-operation and Development Fund Management Corporation representatives also explained the current positioning of the fund, while the representatives from the various Portuguese-speaking Countries each gave a presentation on the investment environment and areas of opportunity in their respective countries. There was also an exchange session with local enterprises.

At the time, the two sides exchanged opinions on the enhancement of cooperation between Hunan, Macao and Portuguese-speaking Countries, Ms Xu recalled. They agreed on utilising the multilateral mechanism of Forum Macao and the advantages of Macao as a commercial and trade cooperation service platform between China and Portuguese-speaking Countries, in order to deepen cooperation in various fields and in order to promote closer ties between governments, business communities and industries.

During the visit by the Hunan delegation, the two sides also signed a “Memorandum of Understanding for the Establishment of Economic Cooperation Partnership”, which created a solid foundation for the expansion of cooperation in the future.