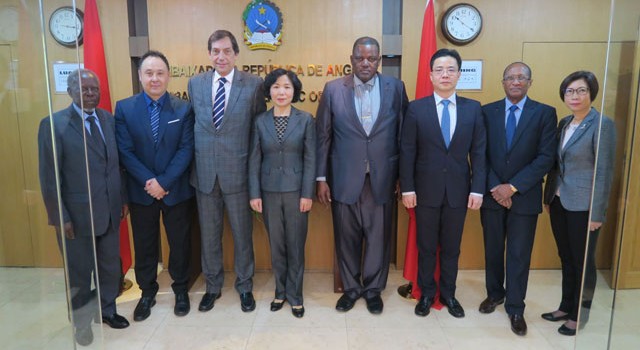 The Secretary-General of the Permanent Secretariat of Forum Macao, Ms Xu Yingzhen, led a delegation on a visit to Beijing between February 24 and 27. The delegation met Ambassadors to China of, respectively, Angola, Brazil, Cabo Verde, Guinea-Bissau, Mozambique, Portugal, São Tomé and Príncipe, and Timor-Leste.

The delegation also visited the Department of Taiwan, Hong Kong and Macao Affairs at the Ministry of Commerce of the People’s Republic of China. All participants exchanged opinions on the Permanent Secretariat’s achievements in 2018, its 2019 work plan, and preparations for the 6th Ministerial Conference.

During the visit, Ms Xu expressed her gratitude on behalf of the Permanent Secretariat, for the support given over the years to Forum Macao by the respective Ambassadors to China of the Portuguese-speaking Countries, the Ministry of Commerce of the PRC and other entities. The Secretary-General gave a presentation about the main activities pursued by the Permanent Secretariat last year – especially regarding the events for the 15th anniversary of the establishment of Forum Macao. She also outlined the work plan for 2019, the work done on implementation of the measures mentioned at the 5th Ministerial Conference and the preparations for the6th Ministerial Conference.

Ms Xu said that in 2018, the Permanent Secretariat had been working closely with other stakeholders, which had producedfruitful results in various areas covered under the framework of Forum Macao. In the past year, the Permanent Secretariat had been implementing the ‘Strategic Plan for Economic and Trade Co-operation’ signed at the 5th Ministerial Conference of Forum Macao; as well as the measures announced under the ‘Memorandum of Understanding on Promoting Co-operation in Production Capacity’.

Forum Macao continues launching collaboration efforts in the field of human resources and in promoting cultural exchange among the members of the platform. In the meantime, an external assessment has started of Forum Macao’s work since its establishment 15 years ago. It will examine all past experiences and consider the likely development trend for the organisation. The Permanent Secretariat promoted the construction in Macao of the “Trade and Economic Co-operation Service Platform between China and Portuguese-speaking Countries Complex”, organised and participate in a series of trade and economic activities, and fulfilled the work plan of 2018.

Ambassadors to China of the Portuguese-speaking Countries, and the Department of Taiwan, Hong Kong and Macao Affairs at the Ministry of Commerce, respectively gave high praise regarding the achievements of the trade and economic cooperation between China and Portuguese-speaking Countries. They also affirmed the positive outcome of Forum Macao’s work throughout its initial 15 years. They also praised Forum Macao’s role and affirmed their willingness to support the construction of Macao’s platform role and noted they would offer ongoing support for the Permanent Secretariat’s work plans, especially the preparation work for the 6th Ministerial Conference, and the continual promotion of the mutual development and prosperity of China and Portuguese-speaking Countries.