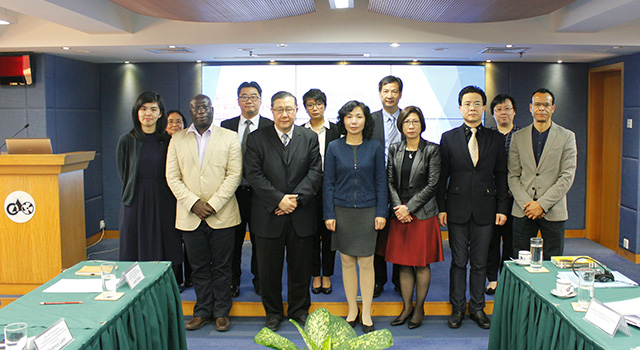 A delegation from the Permanent Secretariat of the Forum for Economic and Trade Co-operation between China and Portuguese-speaking Countries (Macao) – a body also known as Forum Macao – toured on April 3 the facilities of the Macau Productivity and Technology Center (CPTTM), including its Cyber Lab and its House of Apparel Technology. The delegation was led by the Secretary-General of Forum Macao, Ms Xu Yingzhen.

During the visit, the group exchanged views with the Center’s Director-General, Mr Shuen Ka Hung, and some of his staff on the development of Macao as a service platform for trade co-operation between China and the Portuguese-speaking Countries. The parties also discussed potential areas for co-operation between Forum Macao and CPTTM. Mr Shuen additionally gave a short presentation about the Center and the services it offers to firms in the fields of training, technology, management and certification.

Forum Macao’s Ms Xu said the wide range of services offered by the Center helped boost the competitiveness and development of local firms, thus helping to advance Macao’s industrial diversification. Ms Xu said she hoped the Center could make use of Forum Macao – as a platform promoting multilateral co-operation – in order to further exchanges and economic and trade co-operation between China and the Portuguese-speaking Countries. She stated this would help foster and promote the role of Macao as a platform for co-operation.