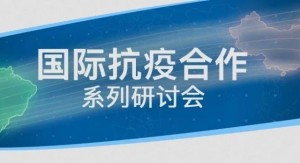 Webinars on International Cooperation Against Covid-19 will be held in series form on respectively June 16, June 23, June 30 and July 7, aiming to promote a global cooperation effort in tackling the novel coronavirus pandemic. The Webinars are co-organised by the Chinese Embassy in Brazil; the Chinese Consulate-General in Rio de Janeiro; the Beijing Municipal Government; and the Government of the State of Minas Gerais in Brazil. The initiative aims to promote further international cooperation in the fight against COVID-19 by allowing the participants to: share front-line experience of combatting the pandemic; promote research on Traditional Chinese Medicine; and deepen collaboration in economic and trade matters.

The four Webinars will be delivered in video conference format, with live online streaming to international audiences via YouTube; and live online streaming to Mainland China audiences via Kuaishou. China Global Television Network (CGTN) will also broadcast the Webinars on its English-language channel. Interested parties can scan a QR code featured on a promotional poster in order to watch live streaming of the Webinars.

The Webinars on International Cooperation Against Covid-19 series is supported by the Permanent Secretariat of the Forum for Economic and Trade Co-operation between China and Portuguese-speaking Countries (Macao), as well as by: the National Academy of Medicine of Brazil; the Oswaldo Cruz Foundation; the China Council for International Investment Promotion; the China-Brazil Business Council; the Association of Chinese Companies in Brazil; the China Chamber of Commerce for Import and Export of Medicines and Health Products; the China Association for Research and Advancement of Chinese Traditional Medicine; the Beijing Hengji Health Management and Development Foundation; and China Media Group. Representatives of relevant departments from Portuguese-speaking Countries, medical and health specialists from Macao’s Health Bureau, and representatives from the Traditional Chinese Medicine Science and Technology Industrial Park of Co-operation between Guangdong and Macao will also take part in the Webinar sessions.