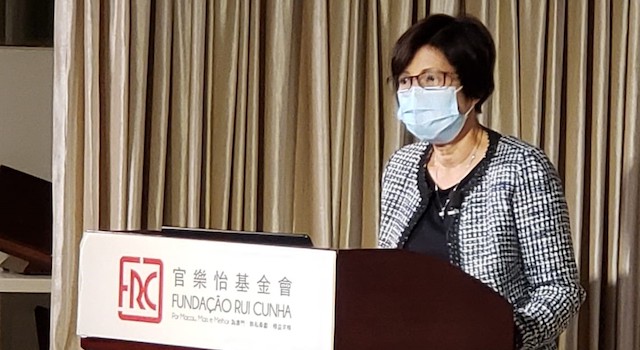 A Seminar on Strengthening Cooperation between China and Portuguese-Speaking Countries was held on August 31 in Macao. It was organised by the Portugal-China Chamber of Commerce and Industry, and was supported by Rui Cunha Foundation and the Macao Trade and Investment Promotion Institute. The Coordinator of the Support Office to the Permanent Secretariat of Forum Macao, Ms Teresa Mok, took part in the event, as a guest speaker.

The seminar was titled “Integrating Macao in National Development and Promoting Economic Diversification”. Ms Mok’s presentation covered the development of Forum Macao, and the outcomes of cooperation between China and the Portuguese-speaking Countries in a number of fields, including: promotion of trade and investment; human resources; cultural exchanges; and the development of Macao as a Commercial and Trade Co-operation Service Platform between China and Portuguese-speaking Countries.

Ms Mok also talked about the partnerships between Forum Macao and local higher education institutions, namely to provide internship opportunities for students. Such collaboration was with the aim of nurturing professionals proficient in Chinese and Portuguese.

Looking ahead, Ms Mok said Macao could give full play to its role as a platform between China and the Portuguese-speaking Countries, namely by making use of favourable policies under the ‘Belt and Road’ initiative, and policies related to the development of the Guangdong-Hong Kong-Macao Greater Bay Area. She said Macao should: deepen cooperation that benefitted respectively the region, Mainland China and the Portuguese-speaking Countries; promote the economic development of all sides involved in Forum Macao; and explore new opportunities leading to eco