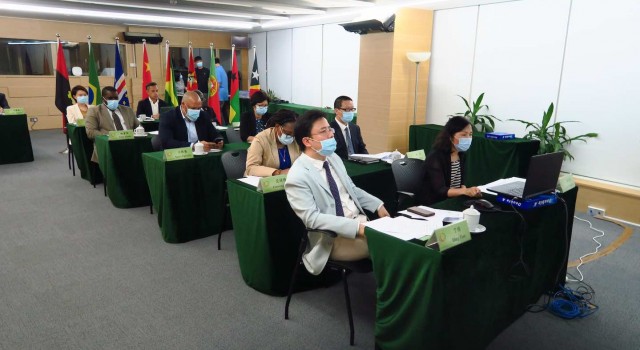 The first session in a series titled Webinars on International Cooperation Against Covid-19 was held online on June 16, at 8pm (Beijing time). A number of guests from China and the Portuguese-speaking Countries and territories attended the first Seminar of the series. They included: the Chinese Ambassador to Brazil, Mr Yang Wanming; the Consul-General of China in Rio de Janeiro, Brazil, Mr Li Yang; the Secretary-General of the Permanent Secretariat of Forum Macao, Ms Xu Yingzhen; and the representative of the Shanghai Municipal People’s Government, Ms Wu Fan. Also attending were: the Mayors respectively of the Brazilian municipalities Niterói, Japeri and Mangaratiba; the Minas Gerais State Government Secretary; a representative of the Rio de Janeiro Government; and officials respectively from the Governments of Angola, Cabo Verde, Guiné-Bissau, and the Macao Special Administrative Region (SAR).

At the first Seminar, the Secretary-General of the Permanent Secretariat of Forum Macao, Ms Xu , delivered a speech on promoting international cooperation in the fight against Covid-19. The Secretary-General said it was imperative for all countries and places to engage in dialogue and cooperation to win the international community’s battle against Covid-19: the latter was becoming a global crisis and an unprecedented challenge. She said the Macao SAR and Forum Macao had taken on the roles of a bridge and cooperation platform between China and the Portuguese-Speaking Countries. Forum Macao had developed several online and offline support activities, such as the publication on the Permanent Secretariat’s official website and its social media accounts, of Portuguese-language versions of promotional videos, the titles of which translate in English as “Coming together to fight the pandemic!” and “ Better prevention, better protection!”. Forum Macao had also donated protective and safety equipment to Portuguese-speaking Countries with the help of Macao trade associations.

In order to strengthen cooperation between China and Portuguese-speaking Countries in the fight against the pandemic, Forum Macao’s Secretary-General Ms Xu called for:

Government representatives of the Macao SAR and of some Portuguese-speaking Countries, namely Angola, Cabo Verde and Guiné-Bissau; as well as representatives of the Traditional Chinese Medicine Science and Technology Industrial Park of Co-operation between Guangdong and Macao; and of the Embassy of Angola in China, the Embassy of Guiné-Bissau in China and the Consulate General of Angola in the Macao SAR, also took part in the first Webinar.