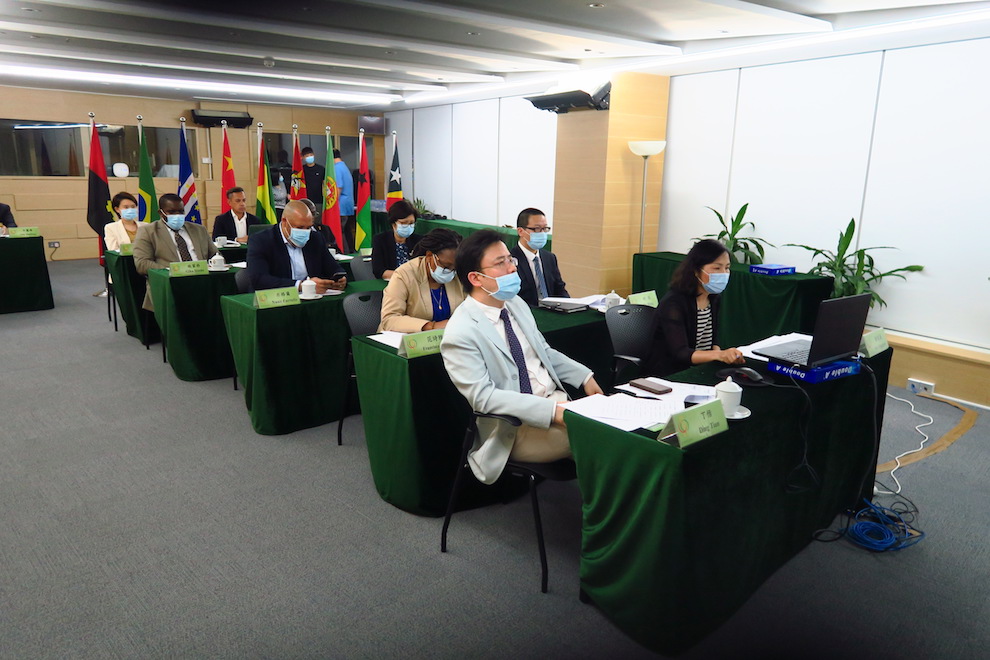 The first session in a series titled Webinars on International Cooperation Against Covid-19 was held online on June 16, at 8pm (Beijing time). A number of guests from China and the Portuguese-speaking Countries and territories attended the first Seminar of the series. They included: the Chinese Ambassador to Brazil, Mr Yang Wanming; the Consul-General of China in Rio de Janeiro, Brazil, Mr Li Yang; the Secretary-General of the Permanent Secretariat of Forum Macao, Ms Xu Yingzhen; and the representative of the Shanghai Municipal People’s Government, Ms Wu Fan. Also attending were: the Mayors respectively of the Brazilian municipalities Niterói, Japeri and Mangaratiba; the Minas Gerais State Government Secretary; a representative of the Rio de Janeiro Government; and officials respectively from the Governments of Angola, Cabo Verde, Guiné-Bissau, and the Macao Special Administrative Region (SAR).

At the first Seminar, the Secretary-General of the Permanent Secretariat of Forum Macao, Ms Xu , delivered a speech on promoting international cooperation in the fight against Covid-19. The Secretary-General said it was imperative for all countries and places to engage in dialogue and cooperation to win the international community’s battle against Covid-19: the latter was becoming a global crisis and an unprecedented challenge. She said the Macao SAR and Forum Macao had taken on the roles of a bridge and cooperation platform between China and the Portuguese-Speaking Countries. Forum Macao had developed several online and offline support activities, such as the publication on the Permanent Secretariat’s official website and its social media accounts, of Portuguese-language versions of promotional videos, the titles of which translate in English as “Coming together to fight the pandemic!” and “ Better prevention, better protection!”. Forum Macao had also donated protective and safety equipment to Portuguese-speaking Countries with the help of Macao trade associations.

In order to strengthen cooperation between China and Portuguese-speaking Countries in the fight against the pandemic, Forum Macao’s Secretary-General Ms Xu called for:

Government representatives of the Macao SAR and of some Portuguese-speaking Countries, namely Angola, Cabo Verde and Guiné-Bissau; as well as representatives of the Traditional Chinese Medicine Science and Technology Industrial Park of Co-operation between Guangdong and Macao; and of the Embassy of Angola in China, the Embassy of Guiné-Bissau in China and the Consulate General of Angola in the Macao SAR, also took part in the first Webinar.

Guidelines to prevent the spread of the epidemic

Joint efforts in fighting the epidemic