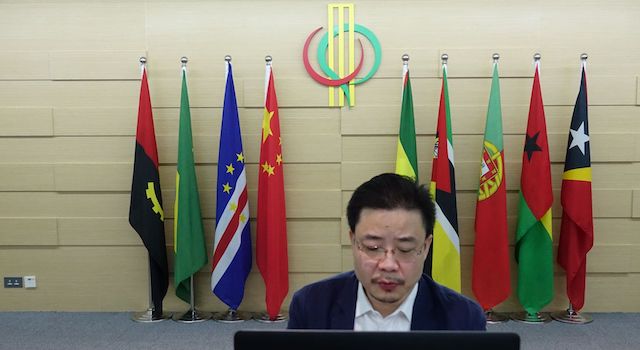 A forum on “Machine Translation, Artificial Intelligence and Smart Cities in the Era of Big Data” was held online this morning. The event, organised by Macao Polytechnic Institute (MPI), looked into the application of cutting-edge technology to promote automated translation, artificial intelligence, and smart cities. New scientific research studies related to these fields were also presented at the forum.

Deputy Secretary-General of the Permanent Secretariat of Forum Macao Mr Ding Tian was invited to deliver a speech at the event.

His address was titled: “Successful work execution relies on effective tools: Machine translation technologies support the development of the Macao platform”. In it, Mr Ding highlighted Macao’s ongoing growth as a base for the training of human resources, namely people bilingual in Portuguese and Chinese, and the continuous developments in research into automated translation systems, as key to the development of cooperation between China and the Portuguese-speaking Countries.

He pointed out the need to promote exchanges and cooperation in these fields between higher education institutions, and close communication between scientific research institutions, while also promoting the training of bilingual teachers and embracing fresh talent. That, he said, was in order to boost Macao’s position as a base for training of people bilingual in Portuguese and Chinese, and for integrating available resources; thus making the most of Macao’s linguistic advantages and the city’s role as a link between China and the Portuguese-speaking Countries.

Constant development of infrastructure in Portugal, Angola and Brazil