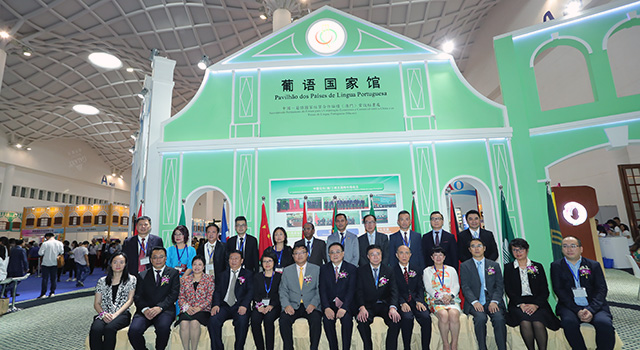 Representatives of the Permanent Secretariat of the Forum for Economic and Trade Co-operation between China and Portuguese-speaking Countries (Macao) visited Haikou, in Mainland China’s Hainan Province, from November 16 to 18. They took part in the “Dynamic Macao Business and Trade Fair” in that city, which featured a pavilion dedicated to the Portuguese-speaking Countries. The Forum Macao representatives also toured the facilities of some local firms.

As part of the Dynamic Macao event, the Permanent Secretariat of Forum Macao set up a Portuguese-speaking Countries’ Pavilion, containing displays about those places. The aim of the Pavilion was to promote the business and investment environments of the eight Portuguese-speaking Countries, namely Angola, Brazil, Cape Verde, Guinea-Bissau, Mozambique, Portugal, São Tomé and Príncipe, and East Timor. Another goal was to promote the activities of Forum Macao and the role of Macao as a service platform.

The products unique to the respective Portuguese-speaking Countries and the vast range of tourism activities available in these countries provide great scope for further cooperation between them and Hainan Province. Such products and tourism offerings have generated great interest from businesses and the public in Mainland China.

The representatives of the Permanent Secretariat of Forum Macao attended while in Hainan the opening ceremony of the “Dynamic Macao Business and Trade Fair”, toured several pavilions at the fair, and held discussions with many business officials. The group also took part – along with other people from Macao – in tourism business exchange sessions with representatives of Hainan Province.

The Forum Macao representatives also toured the facilities of some local pharmaceutical firms and those of some wine trading businesses.

The trade and commercial cooperation ties between Hainan, Macao and Portuguese-speaking Countries were also enhanced by the establishment of new links for exchanges between firms from all sides, including in the field of conventions and exhibitions.