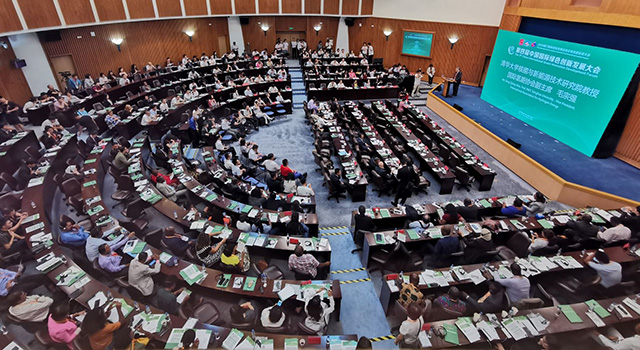 The seminar on investment cooperation between China and Portuguese-speaking Countries was held on September 8 at the Xiamen international Conference and Exhibition Center. It was organised by the Permanent Secretariat of Forum Macao and the China Council for International Investment Promotion (CCIIP). The event was supported by the Macao Trade and Investment Promotion Institute (IPIM).

CCIIP Chairperson Ms Ma Xiuhong and the Secretary-General of the Permanent Secretariat of Forum Macao Ms Xu each gave a speech during the seminar.

The Secretary-General of the Liaison Office of the Central People’s Government in the Macao SAR Mr Wang Xindong and the Office’s Department of Economic Affairs Deputy Director-General Ms Li Huaying also attended the seminar.

More than 100 people took part in the seminar – including Representatives of Portuguese-speaking Countries to Forum Macao, participants in three seminars held by a training centre of the Ministry of Commerce of the People’s Republic of China, and delegates from Mainland China companies. They all took full advantage of the opportunity to exchange ideas.

The Secretary-General encouraged all sides to take full advantage of Macao’s unique advantages as a cooperation platform – especially the opportunities coming from the joint development of the “Belt and Road” initiative and of the Guangdong-Hong Kong-Macao Greater Bay Area – in order to boost investment cooperation and explore new models of win-win cooperation. She said the Permanent Secretariat of Forum Macao would, as always, continue to create favourable conditions for cooperation and provide quality support services for companies, thus helping to boost Macao’s position as a service platform and the city’s economic diversification.