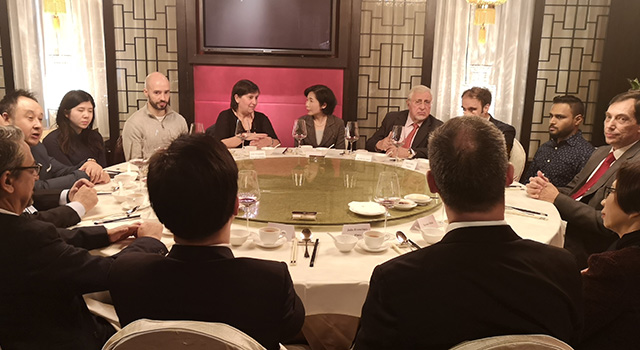 The Permanent Secretariat of the Forum for Economic and Trade Co-operation between China and Portuguese-speaking Countries (Macao) hosted on January 24 a gathering with representatives from local Portuguese-language media. The event took place at the Emperor Hotel.

Secretary-General Ms Xu Yingzhen thanked the Portuguese-language media representatives for the sector’s support for the Permanent Secretariat’s work. She also delivered a presentation on the work done by Forum Macao in 2018 and unveiled its activity plan for the current year.

Ms Xu noted that Forum Macao celebrated its 15th anniversary in 2018, with more than 80 activities organised throughout the year. She said the activity plan for last year had achieved its goals, thanks in part to the timely coverage of Forum Macao’s work provided by local media.

She added that the Permanent Secretariat would continue to support the Macao SAR Government in positioning Macao as a Commercial and Trade Cooperation Service Platform between China and Portuguese-speaking Countries, in order to promote the joint development of Macao, Mainland China and the Portuguese-speaking Countries. Ms Xu said she hoped local Portuguese-language media could continue providing support for, and coverage of,Forum Macao’s work and related activities.