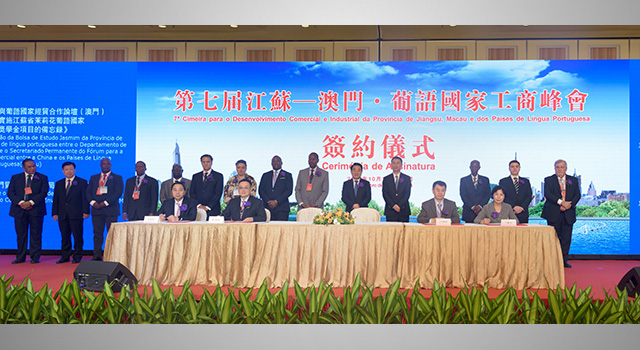 China’s Jiangsu Province is organising the “7th Jiangsu – Macau – Portuguese-speaking Countries Business Forum”, being held from October 19 to 21. The Business Forum features a number of high-profile activities, including: the opening ceremony; a presentation about Suqian prefecture; a Jiangsu crabmeat tasting session; and a meeting of the Working Group for Promoting Trade and Investment Cooperation between Jiangsu, Macao and Portuguese-speaking Countries.

Following the establishment in October 2014 of a Council for the Jiangsu – Macau – Portuguese-Speaking Countries Business Forum, five working groups were created to promote cooperation in, respectively: trade and investment; education; agriculture; tourism; and fisheries. These working groups have established their work plans; set up coordination and contact networks between their members; implemented systems to strengthen information exchange; further promoted staff exchanges; and supported projects considered a priority in their respective areas of responsibility. The overall goal of the working groups is to generate new cooperation opportunities and boost collaboration and exchanges in several fields between Mainland China, Macao and the Portuguese-speaking Countries.

The current edition of the Business Forum has already achieved important results, with signing ceremonies held for several cooperation projects. They include: a memorandum of cooperation for the offering of scholarships to students from Portuguese-speaking Countries studying in Jiangsu, and which involves the Department of Education of Jiangsu Province and the Permanent Secretariat of Forum Macao; and a memorandum of cooperation between the Department of Commerce of Jiangsu Province and the Macao Trade and Investment Promotion Institute. There were also signing ceremonies for: a US$360-million strategic cooperation agreement between Angola’s OPAIA Group and China Jiangsu International Economic-Technical Cooperation Group Co Ltd; a US$50-million housing construction project in Luanda Province in Angola, to be promoted by TAMAR Lda and Jiangsu Provincial Construction Group Co Ltd; and a US$80-million urban development project in East Timor, involving Macao Jin Shang Holding Co Ltd and Jiangsu Longxin Construction Group Co Ltd.

The role of the Business Forum as a cooperation platform has been increasingly strengthened over the years, promoting collaboration in the fields of investment and trade, education, agriculture, tourism and fisheries, between Jiangsu, Macao and the Portuguese-speaking Countries.