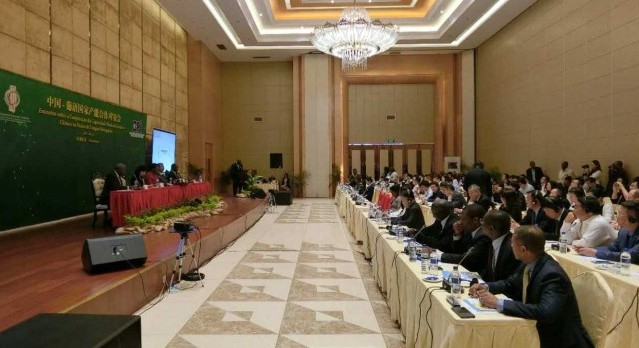 The delegation’s first stop was Mozambique from June 12 to 14. There it  helped organise in the Mozambican capital, Maputo, the “Meeting on the Industrial Capacity Cooperation between China and Portuguese-speaking Countries”.

The delegation formed by the Permanent Secretariat consisted of officials and representatives of enterprises from the Mainland provinces of Hunan, Jiangsu and Shandong, as well as from the Bank of China, Macau Branch. The delegation was warmly welcomed by China’s Ambassador to Mozambique, Mr Su Jian, and diplomats from the Chinese Embassy there. Ambassador Su said that China and Mozambique enjoyed a good relationship. The economies of the two countries were complementary, and this would assist in the promotion of industrial capacity cooperation, he added.

Mozambique was rich in natural resources and energy sources, with fertile lands abundant in the country, noted the Ambassador. The country also had a 2,600-kilometre coast line, with rich marine resources, and had other great advantages in terms of its geographic location. With an average economic growth rate of 7 percent in the past decade, Mozambique was a country that offered good investment prospects for Chinese enterprises, said Mr Su.

Forum Macao’s Ms Xu thanked Ambassador Su for the welcome. She said that the visit was aimed at encouraging further exchanges between Mainland China and Mozambique, helping companies from both sides find more business opportunities.

The delegation was initially received by the Prime Minister of Mozambique, before it paid visits to, respectively, the Chinese Embassy in Mozambique, the Mozambican Ministry of Industry and Commerce, the Ministry of Foreign Affairs and Cooperation, and the Ministry of Resources and Energy. In the meetings, the delegation exchanged information regarding social development, investment and the need to strengthen cooperation in strategic areas such as industrial capacity.

The delegation also visited Mozambique’s Institute of Traditional Medicine and the second phase of the Olympic housing construction project; the latter being the first project in Mozambique developed by a Macao enterprise. Via the delegation’s stop in the country, Chinese enterprises became more interested in – and were encouraged to invest in – Mozambique.

On June 14, the Permanent Secretariat of Forum Macao and the Investment Promotion Centre of the Mozambican Ministry of Economy and Finance jointly organised the “Meeting on the Industrial Capacity Cooperation between China and Portuguese-speaking Countries”. It was attended by approximately 200 people. Among those who joined the meeting were representatives of the Mozambican government and of Mozambican enterprises, as well as representatives from the Chinese Embassy in Mozambique. Also attending the meeting were officials from different provincial and municipal governments in Mainland China and representatives of enterprises from the provinces of Hunan, Jiangsu and Shandong – the latter with experience of projects related to industrial capacity cooperation. Additionally present were representatives from the financial sector, with a view to providing financial support to projects related to industrial capacity cooperation. They included representatives from the Bank of China, Macau Branch, a renminbi clearing bank in Macau.

The Director of Asia and Oceania of Mozambique’s Ministry of Foreign Affairs and Cooperation, Mr Belmiro Malate; the Vice President of the Confederation of Economic Associations of Mozambique, Mr Álvaro Massinga; Forum Macao’s Ms Xu; and Ambassador Su each gave a speech at the opening ceremony. The Deputy Secretary-General (appointed by the Macao SAR) of the Permanent Secretariat of Forum Macao, Ms Echo Chan, did a presentation about Forum Macao and the role Macao plays as a service platform.

Representatives of enterprises in the areas of logistics, import and export trade, investment, infrastructure construction, banking, information technology, food and beverage, and cultural communications were also in attendance. Participants exchange information regarding industrial capacity cooperation, business and investment opportunities, industrial development, RMB trading business and the advantages of cooperating with Mainland China enterprises. Representatives from Chinese enterprises, including those from Macao, shared their respective experience about investing in Mozambique. That was followed by a business-matching session.

The visit and the activities in Mozambique represented a great opportunity to deepen exchanges and cooperation between enterprises from Mainland China, Macao and Portuguese-speaking Countries. They also helped representatives from Mainland China and Macao better to understand the development advantages of Mozambique, further promoting industrial capacity cooperation between all the parties involved.