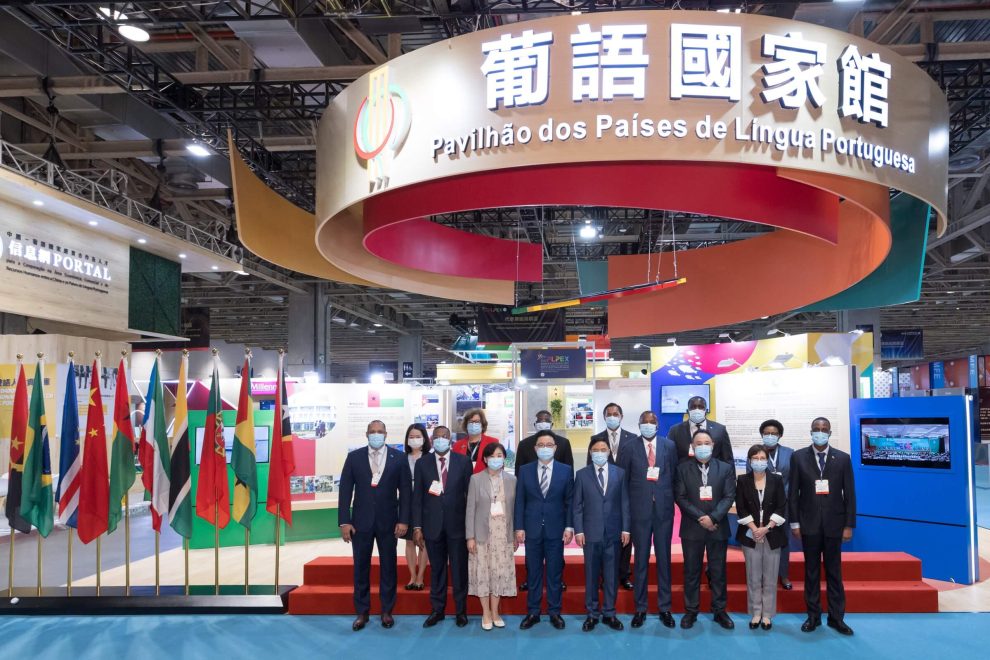 October 20, Secretary-General Mr. Ji Xian Zheng and key members of the Permanent Secretariat of Forum Macao attended the opening ceremony of the “27th Macao International Trade and Investment Fair” (MIF), the “Macao Franchise Expo 2022” (MFE) and the “2022 Portuguese Speaking Countries Products and Services Exhibition (Macao)” (PLPEX). This year, the Permanent Secretariat built the “Portuguese-speaking Countries Pavilion” in promotion of Macao as “One Centre, One Platform, One Base”.

The Permanent Secretariat, as a MIF partner, built the pavilion with the aim to present and promote products from Portuguese-speaking countries (“PLPs”) through the PLPEX platform. The pavilion included booths dedicated to the nine PLPs – Angola, Brazil, Cape Verde, Guinea-Bissau, Equatorial Guinea, Mozambique, Portugal, São Tomé and Príncipe, and East Timor –  showcasing their unique products and investment and business environment by means of texts, photos, videos, and physical products; as well as promoting Forum Macao. During the exhibition, staff were available to answer enquiries and provide information about the PLPs, with an effort to leverage the Macao role as a platform for exchange and cooperation between China and PLPs, and to create business opportunities between the two sides.

During the MIF, the Permanent Secretariat also participated in the organization of a series of activities, i.e. “The 12th Industrial and Commercial Summit between Jiangsu-Macao-Portuguese Speaking Countries”, the “Zhejiang-Macao-Portuguese Speaking Countries Economic and Trade Co-operation and Exchange Conference”, and the “Fujian, Macao and Portuguese-speaking Countries Economic and Trade Co-operation Conference”. The Forum works to strengthen exchanges and cooperation between PLPs and the provinces and cities of Mainland China and to promote economic and trade cooperation between the Forum and all participating parties.