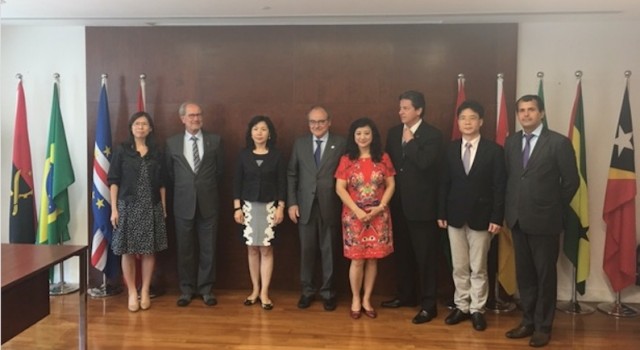 Secretary-General Xu emphasised the importance of making use of Macao’s role as a platform between China and Portuguese-speaking Countries, as the city provides useful services, especially thanks to some shared heritage regarding language and certain tax benefits. The Permanent Secretariat of Forum Macao would also provide support in relevant matters, said Ms Xu.

The delegation of Brazil’s National Confederation of Services visited Macao following its participation in the Beijing International Fair for Trade in Services (CIFITS), where the confederation had an exhibition stand. During the Beijing event, the confederation signed 10 letters of intent with several Chinese entities and with The Silk Road Foundation, seeking to strengthen ties between China and Brazil.

During the meeting with Forum Macao representatives, Mr Luigi Nese, President of Brazil’s National Confederation of Services pointed out the value of using Macao as a showcase to display to Mainland China the culture and traditions of Brazil, so that more Chinese take an interest in Brazil and visit the country. Currently, he said, Brazil receives about six million foreign visitors each year.

China and Brazil signed an agreement in Macao in October 2016, aiming to promote closer cooperation between the two sides. The delegation of the National Confederation of Services said it hoped to utilise Macao as a trade and service platform between China, Brazil and other Portuguese-speaking Countries.

The National Confederation of Services represents about 400,000 micro-sized, small- and medium-sized enterprises.