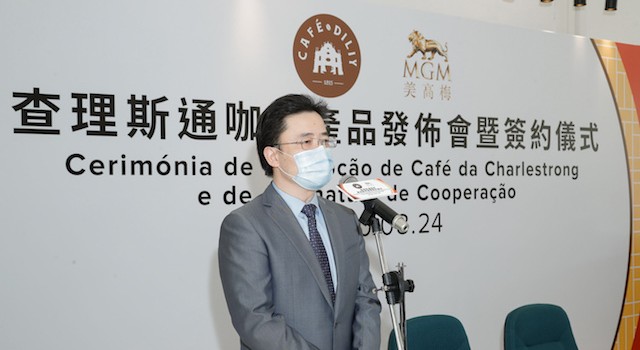 A promotion and cooperation agreement signing ceremony involving the Charlestrong Coffee brand was held at the Portuguese-speaking Countries’ Food Products Exhibition Centre on August 24, 2020. The Secretary-General of the Liaison Office of the Central People’s Government in the Macao SAR, Mr Wang Xindong, attended the event.

Also attending the ceremony and witnessing the signing of the agreement were: Deputy Secretary-General of the Permanent Secretariat of the Forum for Economic and Trade Co-operation between China and Portuguese-speaking Countries (Macao), Mr Ding Tian; the Coordinator of the Support Office to the Permanent Secretariat of Forum Macao, Ms Teresa Mok; Macao Trade and Investment Promotion Institute Executive Director, Mr Sam Lei; and MGM China Holdings Ltd President and Chief Operating Officer, Mr Hubert Wang.

Forum Macao Deputy Secretary-General Mr Ding noted in his speech that Charlestrong Café Co. Lda had been keen on taking advantage of Macau’s role as a platform for exploring markets in Portuguese-speaking Countries. The company’s investment in Timor-Leste’s coffee sector stood out – among several of its initiatives – as a win-win situation for local economic development and for the company’s own growth.

In light of the significant impact this year on the global economy due to the pandemic caused by the new coronavirus, countless companies had faced unprecedented pressure. Charlestrong Café Co. Lda managed however to sail against the economic tide, fulfilling its investment in a deal that relied on the proactive and continued coordination of the Permanent Secretariat of Forum Macao, mainly through the Representative of Timor-Leste to Forum Macao, Mr Danilo Henriques. He noted the success of this investment initiative not only created a new model for the promotion within Mainland China and the Macao SAR of products from Portuguese-speaking Countries, but also highlighted the unique advantages of Macao as a platform.