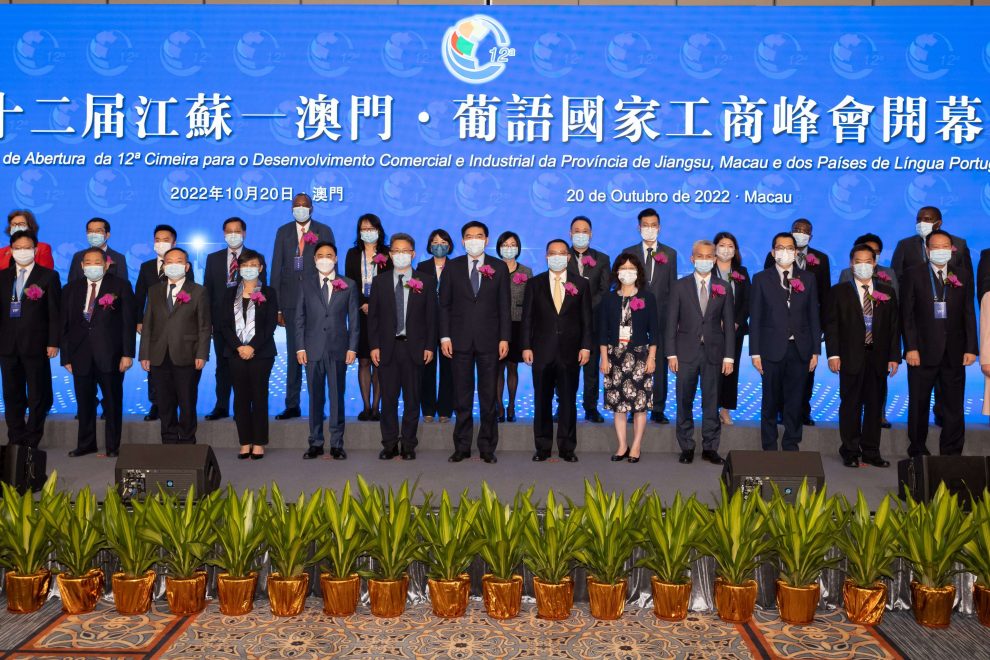 On the afternoon of October 20, the “12th Industrial and Commercial Summit between Jiangsu-Macao-Portuguese Speaking Countries” was held at The Venetian Macao. The Deputy Secretary-General of the Jiangsu Provincial Government, Huang Lan, Secretary-General of the Permanent Secretariat of Forum Macao, Ji Xianzheng, Executive Director of the Macao Trade and Investment Promotion Institute (IPIM), Sam Lei, and Deputy Secretary-General of the Permanent Secretariat of Forum Macao, Paulo Jorge do Espírito Santo, attended the activities and delivered speeches. More than 300 guests from Jiangsu, Macao and Portuguese-speaking countries (PSCs) participated in the Summit and representatives of PSCs to Forum Macao participated in the exchange activities.

Secretary-General Ji Xianzheng said that since its inception in 2011, the “Industrial and Commercial Summit between Jiangsu-Macao-Portuguese Speaking Countries” has been organized for 11 consecutive years and has achieved pragmatic effects and acquired extensive social influence in promoting industrial connections, people-to-people exchanges and cultural exchanges between Jiangsu, Macao and PSCs. As he pointed out, the Summit has not only become an important platform and cooperation window for Jiangsu, Macao and PSCs to carry out economic and cultural exchanges, but has also set a good example of economic and trade cooperation between provinces and cities in Mainland China and PSCs carried out via the platform of Macao. He noted that Forum Macao is the only multilateral economic and trade cooperation mechanism in China that uses language as a bond to promote cross-regional cooperation. PSCs with abundant natural resources and huge market and development potential are complementary to China. As a “Commercial and Trade Cooperation Service Platform between China and Portuguese-speaking Countries”, Macao has played an extraordinary role in promoting economic and trade cooperation between China and PSCs. He said that the Permanent Secretariat of Forum Macao will earnestly implement the consensus reached during the Extraordinary Ministerial Meeting of Forum Macao held in April 2022 to promote economic, trade and cultural exchanges and cooperation between Forum Macao and different sectors by organizing a series of activities such as conferences, exhibitions, training, pandemic prevention experience sharing sessions and visits to Mainland China and PSCs.

Deputy Secretary-General of the Permanent Secretariat of Forum Macao, Paulo Jorge do Espírito Santo, delivered a speech on behalf of PSCs. He said the Summit has laid a solid foundation for the participating parties to establish and reinforce exchanges and cooperation. The areas of cooperation have been further expanded to include tourism, science and technology, industry, education, health and so on. Previous editions of the Summit have highlighted how boosting the economic resilience of the participating parties and providing resources to create conditions for their economic development helped them weather a difficult time together. In this context, he pointed out the importance of reviewing the Framework Agreement on Cooperation signed in 2011 to better adapt to the current circumstances, of closely following the Belt and Road Initiative to establish more mutually beneficial cooperation, and of seeking better solutions to boost economic growth for the participating parties, particularly to provide support for SMEs, which is also one of the results of this year’s Extraordinary Ministerial Meeting. He also welcomed enterprises from Mainland China and Macao to invest and prosper in PSCs.