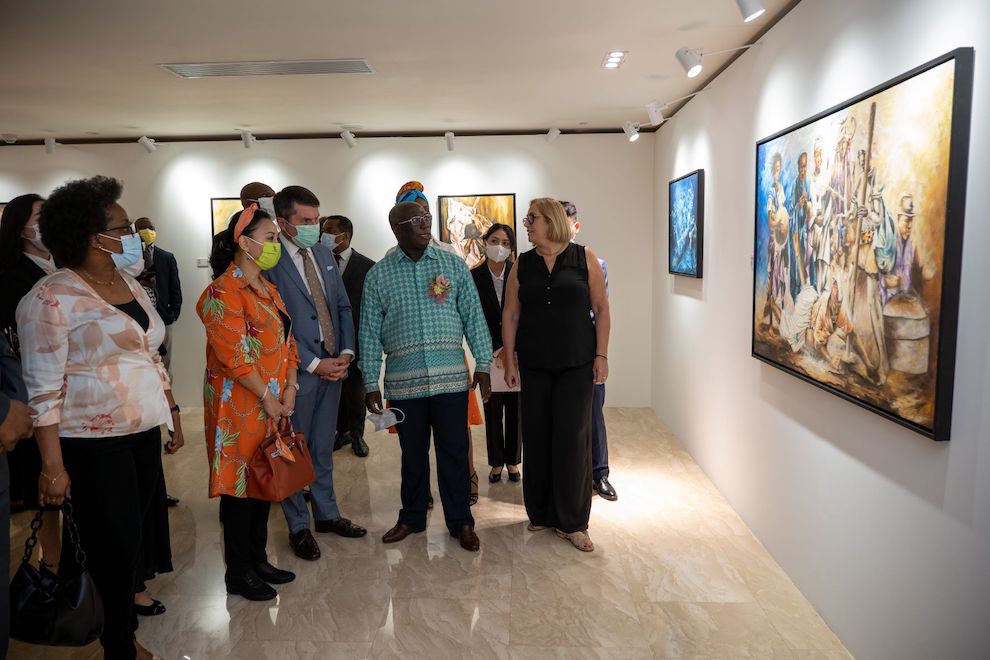 The inauguration ceremony for the “Destruction of Humanity” exhibition, featuring work by Guinea-Bissau artist Ismael Hipólito Djata, was held at the China-Portuguese-speaking Countries Commercial and Trade Service Platform Complex on Tuesday (September 21), at 6.30pm. The event was organised by the Permanent Secretariat of Forum Macao, under the “Lusophone Polychromes” exhibition series, part of the 13th Cultural Week of China and Portuguese-speaking Countries.

Mr de Jesus Pinto mentioned in his speech that, throughout the centuries to the present day, Macao has acted as a platform between different people, cultures, economies, and continents, bridging East and West. He noted the Forum for Economic and Trade Co-operation between China and Portuguese-speaking Countries had been set up in 2003 not only to boost a new wave of trade and economic ties between China and Portuguese-speaking Countries, but also to promote people-to-people exchanges and spur mutual understanding, and had since been promoting cultural awareness between the members of Forum Macao.

The Deputy Secretary-General said the “Lusophone Polychromes” exhibition series highlighted that exchanges and friendship between China and Portuguese-speaking Countries could be strengthened as each side learned more about the other’s culture, lifestyle and traditions.

Ismael Hipólito Djata, a graduate from Portugal’s University of Minho, is a writer, poet, and visual artist. He is one of Guinea-Bissau’s most famous painters. Mr Djata is a member of the Guinea-Bissau Association of Visual Artists, also known as Bissau-Arte, and a founder of the Irmãos Unidos Arts association, besides being an Urban Development Ambassador for the United Nations Human Settlements Programme, a scheme also known as UN-Habitat.

Mr Djata has held a number of solo exhibitions, namely in Guinea-Bissau, and in other African and European countries. He has also taken part in many group exhibitions, art biennials, and visual arts meetings, either at national or international level. He has won multiple awards for his art, and his pieces have attracted wide interest from people in various parts of the world.

The “Destruction of Humanity” exhibition aims to make the audience aware of major social and cultural issues impacting the world. The artworks feature human figures depicted in vivid detail, wearing traditional costumes. The paintings make use of earth tones, resorting to contrast to suggest depth and movement.

The showcase offers visitors an opportunity to discover a new vision of the world, celebrate human diversity, and witness the harmonious coexistence of cultures in Guinea-Bissau. The exhibition shows the universality of art, including knowing no barriers and overcoming national borders, to unite people of all races and languages.

Exhibition period: From September 21 to October 10, Tuesday to Sunday, from 11am to 7pm; closed on Monday. Free admission.

All are welcome to enjoy the exhibition. Visitors must comply with relevant public health guidelines, including the need to wear a protective facemask, to undergo a body-temperature check, and to present a valid “Macao Health Code”. To learn more about the 13th Cultural Week of China and Portuguese-speaking Countries, please visit the website https://semanacultural.forumchinaplp.org.mo/.