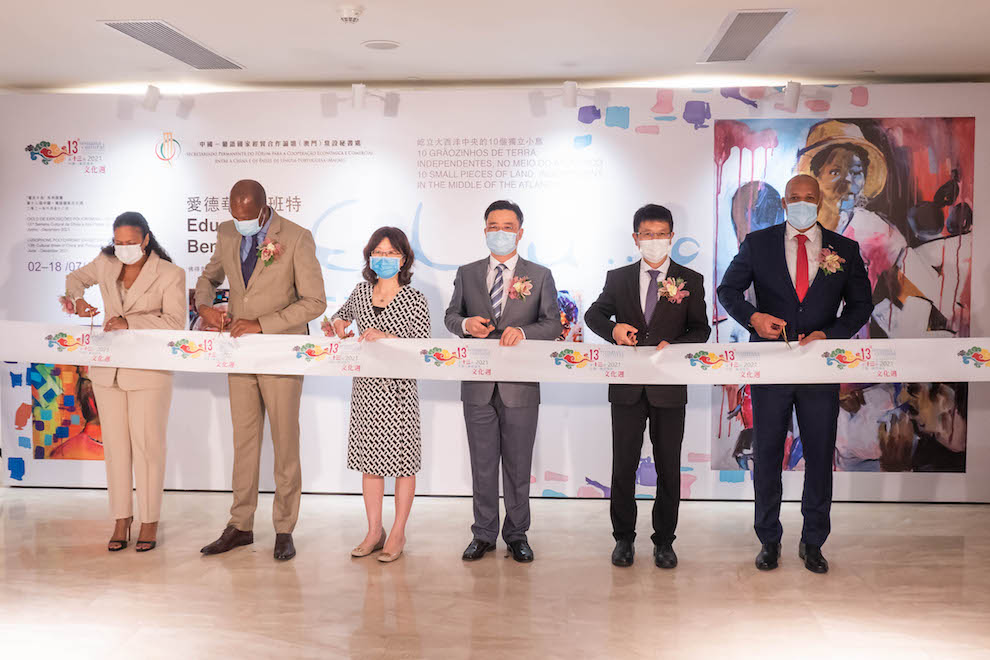 Deputy Secretary-General Mr Ding mentioned in his speech that the Cultural Week was this year continuing the use of online and offline formats. He said significant work by artists from Portuguese-speaking Countries was being constantly showcased in Macau, demonstrating the city’s unique advantages as a place of exchange between Chinese culture and Western cultures. Mr Ding said the Permanent Secretariat of Forum Macao would continue proactively to explore new methods and new channels for cultural exchange between Mainland China, Macau, and Portuguese-speaking countries. This would help China and Portuguese-speaking Countries address jointly challenges related to the pandemic, enable them to develop broader exchanges and foundations for cooperation, and establish a deeper friendship, said Mr Ding.

Eduardo Bentub was born in 1979 on the island of Santo Antão, in Cabo Verde. His interest and passion for art was fully revealed when he worked in the studio of his uncle, the famous Cape Verdean painter David Levy Lima. Mr Bentub uses expressive and vivid colours, accompanied by drawings of figures and texts to describe Cabo Verdean life. His paintings are mostly done in acrylic, and feature either mixed techniques or collage.

Mr Bentub has participated in dozens of exhibitions in places including Portugal, Cabo Verde, Slovenia, Austria, Italy, and Brazil. In 2013 he won an Honourable Mention for Best Young Artist in the European Capital of Culture, the Slovenian city of Maribor. More recently, he was named Best International Artist at the International Art Symposium (2020) held in Slovenia’s Sinji Vrh. The exhibition “10 small pieces of land, independent, in the middle of the Atlantic” will showcase the daily life, habits and culture of the people of Cabo Verde.

Exhibition period: From July 2 to 18, Tuesday to Sunday, from 11am to 7pm; closed on Monday. Free admission.

The Macau-Cabo Verde Friendship Association is holding a series of workshops in tandem with the exhibition. Several artists will be invited to showcase Cabo Verdean culture, namely the country’s music, dance, and musical instruments.

All are welcome to enjoy the exhibition. To learn more about the 13th Cultural Week of China and Portuguese-speaking Countries, please visit the website semanacultural.forumchinaplp.org.mo.