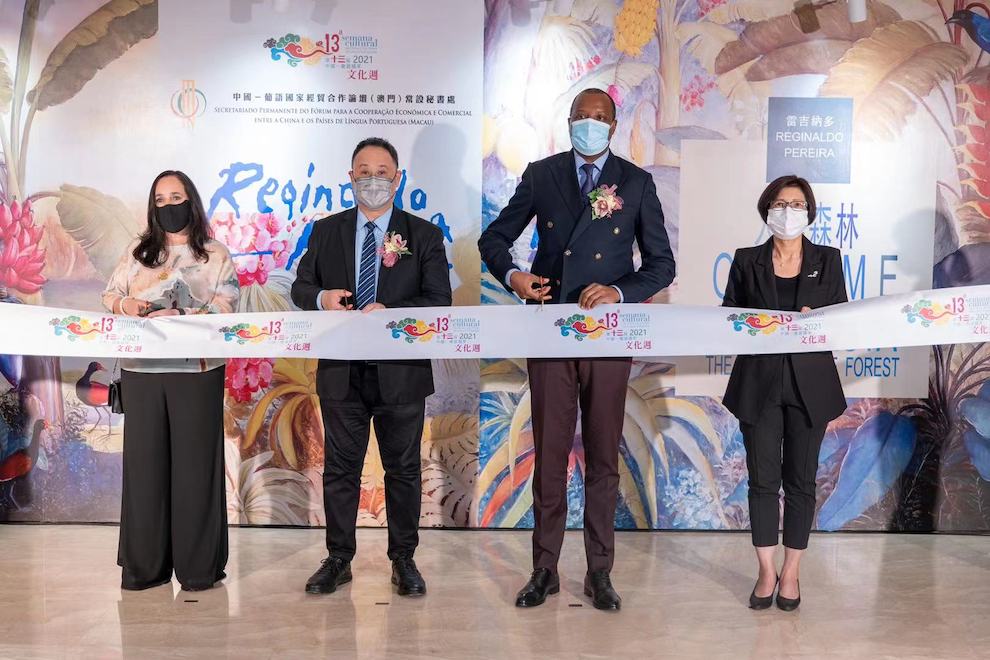 The inauguration ceremony for the “The Man and the Forest” exhibition, which features work by Brazilian artist Mr Reginaldo Pereira, was held at the China-Portuguese-speaking Countries Commercial and Trade Service Platform Complex, on Friday (October 29), at 6.30pm. The event was organised by the Permanent Secretariat of Forum Macao, under the “Lusophone Polychromes” exhibition series, part of the 13th Cultural Week of China and Portuguese-speaking Countries.

Mr de Jesus Pinto mentioned in his speech that the world had been living for almost two years with the poignant drama of a pandemic crisis, with its disastrous economic and social consequences. Despite that, he said the resilience of both China and the other member countries of Forum Macao underlined how multilateral trade was a fundamental element in promoting the recovery of the world’s economy, and how cooperation and cultural initiatives were decisive for trade relations. Mr de Jesus Pinto added that the current exhibition was a showcase of Brazil’s cultural variety and diversity, which extended from deep in the Amazon rainforest and the Pantanal wetland area, to gigantic metropolises such as São Paulo, Rio de Janeiro, Brasília and Belo Horizonte.

Artist Mr Pereira was born on June 22, 1971, in Bom Jardim, Maranhão State, and spent his childhood in bucolic surroundings. He taught himself how to draw and paint before moving to the city of Imperatriz, with the aim of becoming a professional artist and painter. Mr Pereira remained in the city for eight years, honing his skills. He then moved to São Paulo and began studying at the Brazilian Academy of Arts in 1994. Mr Pereira took up residence in Uberaba, Minas Gerais State, in 1997, and became a teacher there. With a group of his students, he opened an art studio and gallery. There, he researches, studies, and teaches oil painting.

Since 1992, Mr Pereira has taken part in group exhibitions and solo exhibitions in Brazil and Portugal.

Exhibition period: From October 29 to November 14, Tuesday to Sunday, from 11am to 7pm; closed on Monday. Free admission.

Casa do Brasil em Macau is holding three dance workshops in tandem with the exhibition, teaching samba to members of the public. The goal is to take participants on a cultural voyage to Brazil.

All are welcome to enjoy the art exhibition. To learn more about the 13th Cultural Week of China and Portuguese-speaking Countries, please visit the website https://semanacultural.forumchinaplp.org.mo/.