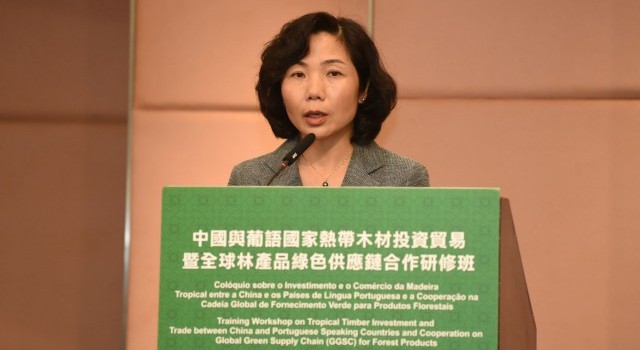 The opening ceremony of the “Tropical Timber Investment and Trade Colloquium between China and Portuguese-speaking Countries and Cooperation on Global Green Supply Chain for Forest Products” was held on November 18 in the Lotus Room of the World Trade Center Macau. The activity was co-organised by the Training Centre of the Forum for Economic and Trade Co-operation between China and Portuguese-speaking Countries (Macao) and the International Tropical Timber Organization (ITTO), in collaboration with the University of Macau.

Officiating guests at the opening ceremony were: the Secretary-General of the Permanent Secretariat of Forum Macao, Ms Xu Yingzhen; the Executive Director of ITTO Mr Gerhard Dieterle; the Director-General of the Department of Hong Kong, Macao and Taiwan Affairs at the Ministry of Commerce, Mr Sun Tong; Deputy Director-General of the Economic Affairs Department of the Liaison Office of the Central People’s Government in the Macao Special Administrative Region (SAR), Ms Li Huaying; Vice Rector of the University of Macau, Mr Ge Wei; the Consul-General of Angola in the Macao SAR, Ms Sofia Pegado da Silva; the Consul-General of Mozambique in the Macao SAR, Mr Rafael Custódio Marques; and the Consul-General of Portugal for Macao and Hong Kong, Mr Paulo Cunha Alves. Speeches were given at the opening ceremony by Secretary-General Ms Xu; ITTO’s Executive Director Mr Dieterle; Director-General Mr Sun; and Vice Rector Mr Ge.

The Colloquium was held in Macao from November 17 to 30. It was the first time that the Permanent Secretariat had held human resources training in cooperation with a United Nations’ organisation. It was also the first time that the colloquium participants came not only from the Participating Countries in Forum Macao but also from elsewhere. In total 23 staff and technicians from Angola, Ecuador, Ghana, Guinea-Bissau, Indonesia, Malaysia, Mozambique, Portugal, and São Tomé e Príncipe came to study and conduct exchanges on jointly promoting the creation of a Global Green Supply Chain and on encouraging the sustainable operation of a market for, and trade in, tropical timber.

Promoting cooperation on the protection of natural resources and of the environment was an integral part of the Strategic Plan signed at the 5th Ministerial Conference of Forum Macao. The recent Colloquium aimed to deepen participants’ knowledge of creation of a global green supply chain for forest products and of the promotion of quality development and sustainability of trade and investment in forest products. Activities such as thematic lectures, field trips and other pursuit – that make the most of Macao’s role as a platform – aim to raise levels of professionalism and promote in-depth cooperation between parties in relation to trade and investment. Such activities also contribute to sustainable development, in concert with efforts to protect natural resources and the environment.