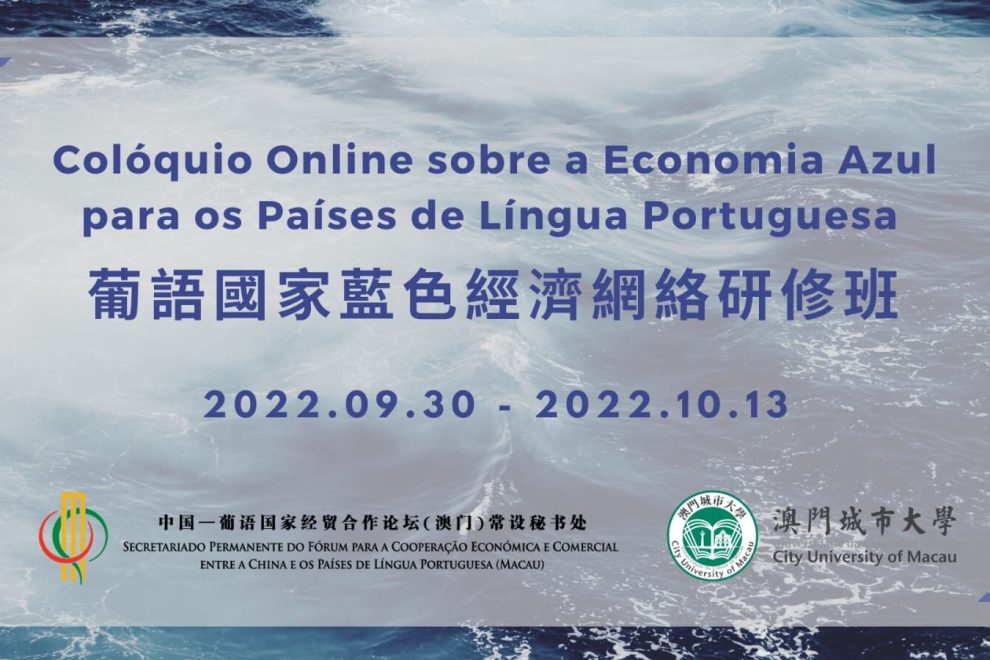 The opening ceremony of the “Training Center of Forum Macao – Online Colloquium on Blue Economy for Portuguese-speaking Countries”, organized by the Permanent Secretariat of the Forum for Economic and Trade Co-operation between China and Portuguese-speaking Countries (Macao) and co-organized by the City University of Macau, took place online on September 30, 2022, at 7:00 p.m. Secretary-General of the Permanent Secretariat of Forum Macao, Ji Xianzheng, and Dean of the Faculty of Business, City University of Macau, Prof. José Alves, delivered their speeches.

Secretary-General Ji Xianzheng said marine cooperation is an integral part of the Strategic Plan for Economic and Trade Cooperation of the 5th Ministerial Conference of Forum Macao, to which the Permanent Secretariat has attached great importance. The Colloquium, he said, is the first of its kind ever held by the Permanent Secretariat under the theme of the blue economy, as part of the effort to explore issues of vital concern to Portuguese-speaking countries in their economic and social development, including the Law of the Sea, the sustainable development and exploitation of marine resources, the marine economy and blue tourism, among others. Secretary-General Ji Xianzheng also expressed his expectation that all parties involved could take advantage of the role of Macao and Forum Macao as a platform to actively promote in-depth cooperation in the field of the blue economy, giving fresh impetus to the recovery and sustainable development of the global economy in the post-pandemic era.

Dean José Alves pointed out the enormous potential for cooperation on the blue economy between China and Portuguese-speaking countries which boast a vast reserve of marine resources. He said the Colloquium has invited experts in the blue economy to share successful experience of ocean governance and the development of the marine economy and discuss relevant cooperation cases related to the marine area to help participants to explore new ideas in their interactions and provide a platform for exchanges and cooperation between China and Portuguese-speaking countries in the field of the blue economy.

The Colloquium is the second colloquium organized by the Training Center of Forum Macao this year, with a total of seven sessions available from September 30 to October 13 in the form of online lectures and themed seminars. About 400 bureau-level officials from the nine Portuguese-speaking countries of Angola, Brazil, Cabo Verde, Guinea-Bissau, Equatorial Guinea, Mozambique, Portugal, São Tomé and Príncipe, and Timor-Leste will attend the sessions online. At the Colloquium, trainees will exchange ideas about a wide range of topics such as the challenges and opportunities of the blue economy, the Law of the Sea and maritime laws, the governance of coastal waters, blue economy strategies, innovations, and sustainable blue tourism, among others. Meanwhile, representatives from the Interdisciplinary Center of Marine and Environmental Research (CIIMAR) of Portugal, Ocean University of China, Shanghai Ocean University and Guangdong Ocean University will be invited to attend the roundtable meeting on the “Blue Economy and Ocean Sustainability”.