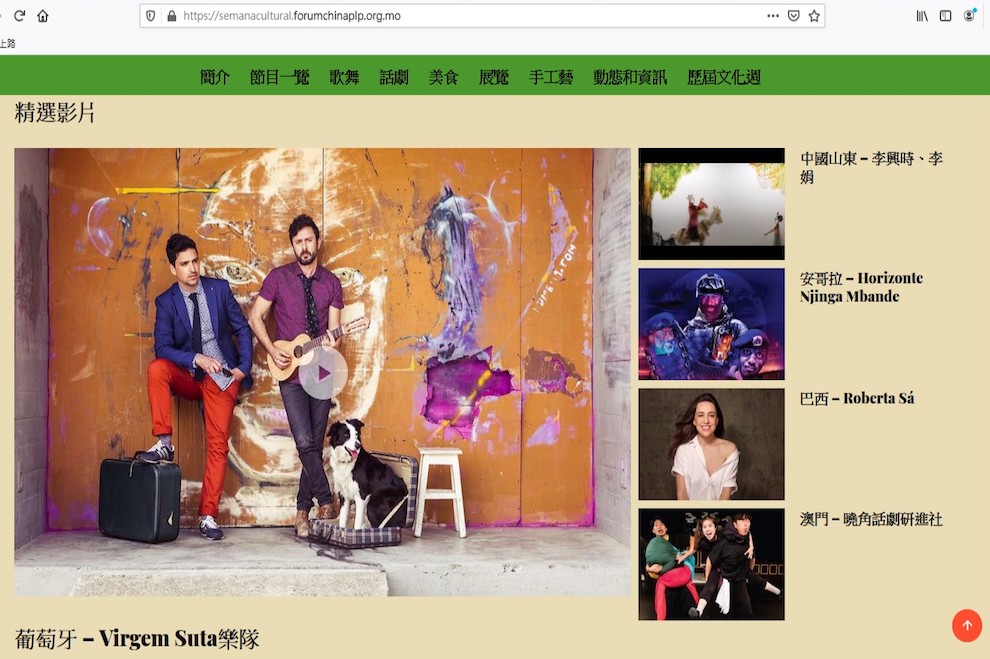 The 12th Cultural Week of China and Portuguese-speaking Countries, organised by the Permanent Secretariat of Forum Macao, saw the Cultural Week employ for the first time, due to the pandemic, a two-pronged approach, namely online and offline formats. The Permanent Secretariat set up a website exclusively dedicated to the Cultural Week, that attracted more than 35,000 page views from China and Portuguese-speaking Countries. A new approach was thus created in response to current challenges, with excellent results for people-to-people and cultural exchanges.

The Cultural Week has been organised by the Permanent Secretariat for over a decade. The 2020 edition featured – via the new online cultural exchange platform –music and dance performances, exhibitions, handicrafts, gastronomy videos, and drama from Mainland China, Macao, and nine Portuguese-speaking Countries and regions. The section of the website with presentations on gastronomy attracted the largest audience, boosting gastronomy’s status as a key element in Sino-Lusophone cultural exchanges, as well as representing a perfect fit regarding the designation of Macao as a Creative City of Gastronomy.

In the latest edition of the Cultural Week, the Permanent Secretariat favoured an online promotion and awareness campaign, buying image-based advertising on Google, and text-based advertising on digital platforms such as YouTube, Facebook and WeChat, as well as using the most popular digital platforms such as TikTok, to reach an audience estimated at 25 million worldwide, which surpassed all previous editions in terms of media exposure.

The offline programmes included events held at the China-Portuguese-speaking Countries Commercial and Trade Service Platform Complex, such as the “1+3” Art Exhibition, and the Sino-Lusophone Cultural Tour showcasing Forum Macao’s successes. Those exhibitions jointly attracted about 700 visitors. In addition, delegates from Portuguese-speaking Countries held open-dialogue sessions and face-to-face interactions with students on the sidelines of these exhibitions.

Chinese, Indian vaccines will be the first used in Brazil