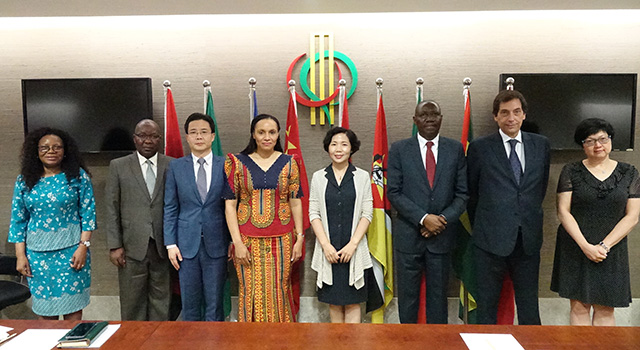 Ms Xu welcomed Ambassador Gustava and congratulated her on the success of a seminar on traditional medicine recently held in Mozambique. Ms Xu also expressed her gratitude for Mozambique’s ongoing support for Forum Macao.

The Secretary-General said she hoped the Ambassador would continue to support the Permanent Secretariat in its activities, including the annual ‘Cultural Week of China and Portuguese-speaking Countries’. Ms Xu added she anticipated Forum Macao and the Government of Mozambique could work together to expand existing cooperation on production capacity, investment, and human resources training.

Ms Gustava highlighted the achievements of Forum Macao since its establishment, and pledged that her country intended to deepen cooperation with China and other Portuguese-speaking Countries on economic and trade matters, as well as in the fields of culture and human resources; making use of Macao as a cooperation platform.

The Ambassador also noted that Mozambique was actively preparing its participation in this year’s Macao International Trade and Investment Fair, an event for which Mozambique has been selected as a ‘partner country’. In addition, Mozambique was also seeking closer cooperation with China through events such as Forum Macao’s ‘Culture Week’ and via personnel training programmes, Ms Gustava said. The Ambassador added that Mozambique could become for Chinese interests a gateway to Southern Africa as a whole.

Francisca Reino, Representative of Mozambique on Forum Macao, and Francisco Manhiça, Advisor to the Consul-General of Mozambique in Macao, also took part in the meeting.