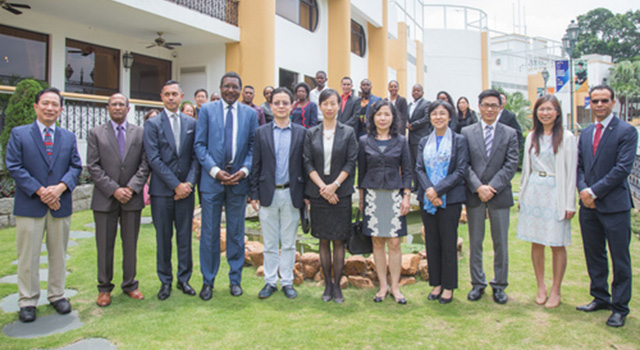 Macao Government Tourism Office (MGTO), in cooperation with the PermanentSecretariat of the Forum for Economic and Trade Cooperation between China and Portuguese-Speaking Countries (Macao) started the training program for this year tailored for civil servants from tourism offices of Portuguese-speaking countries.

Between May and September this year, three training sessions lasting for two weeks each will be conducted in Macao for government personnel from tourism authorities of Angola, Cape Verde, Guinea-Bissau, Mozambique and East Timor. The first batch started its training yesterday (May 15), a second group will come to Macao in July and a third in September, with this year’s program involving a total of 30 trainees. The content of the training program includes internship in six MGTO departments, two days of workshops at the Institute for Tourism Studies (IFT), along with field trips to tourism infrastructures, the city’s historical and cultural heritage and other attractions of Macao.

A lunch to welcome the first group of trainees of this year was held today (May 16) at Pousada de Mong-Há, the educational hotel of IFT. The occasion was attended by MGTO Director, Maria Helena de Senna Fernandes, the Secretary-General of the Permanent Secretariat of Forum Macao, Xu Yingzhen, the President of IFT, Fanny Vong, along with MGTO Deputy Director, Cheng Wai Tong, the three Deputy Secretary-General of the Permanent Secretariat of Forum Macao, Ding Tian, Vicente Manuel and Echo Chan, the Head of MGTO Training and Quality Management Department, Doris Leong, among other guests.

The internship aims to inform the trainees about the daily work of MGTO as well as the overall development of Macao’s tourism industry. In addition, by carrying out the training program, MGTO hopes to enhance mutual learning and exchange between Macao and Portuguese-speaking countries in the field of tourism, while assisting the involved countries to train tourism professionals, in line with Macao’s goal to become a World Centre of Tourism and Leisure and a commercial and trade cooperation service platform between China and Portuguese-speaking countries.

MGTO signed memoranda of understanding on cooperation in tourism with Cape Verde, Guinea-Bissau and Mozambique in 2010, with East Timor in 2013 and Angola in 2015. In addition, in 2016 the Secretariat for Social Affairs and Culture of the Macao Special Administrative Region Government signed a protocol on cooperation in tourism with the Ministry of Economy of Portugal.

Between 2012 and 2016, MGTO trained 98 government tourism personnel from Portuguese-speaking countries.