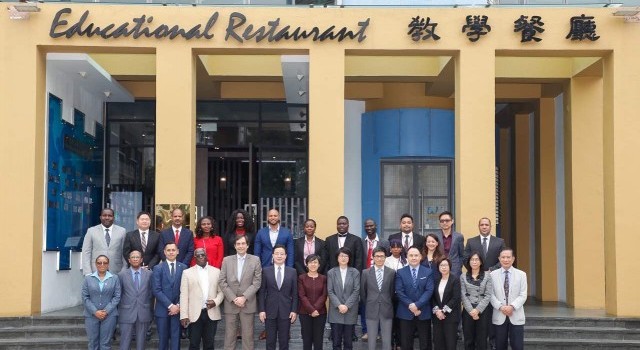 The Macao Government Tourism Office (MGTO), in cooperation with the Permanent Secretariat of the Forum for Economic and Trade Cooperation between China and Portuguese-Speaking Countries (Macao), has unfolded the 2019 training program tailored for civil servants from tourism offices of six Portuguese-speaking countries, each with a duration of two weeks in Macao.

Held in March, May and July this year, three training sessions each spanning two weeks will be conducted in Macao for 33 government personnel from tourism authorities of Portuguese-speaking countries. The internship commenced on Monday (March 18) for the first group of 9 participants from Angola, Cape Verde, Guinea-Bissau, Mozambique and São Tomé and Príncipe, while the second and third groups will arrive to Macao in late May and early July respectively.

A luncheon was held to welcome the first group of trainees of this year today (20 March) at IFT Educational Restaurant with the presence of MGTO Director Maria Helena de Senna Fernandes, Deputy Secretaries-General of the Permanent Secretariat of Forum Macao, Rodrigo Brum, Ding Tian and Casimiro de Jesus Pinto, Acting President of IFT, Florence Ian, MGTO Deputy Director Cheng Wai Tong, Coordinator of the Supporting Office to the Permanent Secretariat of Forum Macao, Teresa Mok, as well as Director of Global Centre for Tourism Education and Training at IFT, John Ap, among other guests.

The internship aims to acquaint trainees about the daily operation of MGTO as well as the overall development of Macao’s tourism industry. Through the training program, MGTO hopes to enhance mutual learning and exchange between Macao and Portuguese-speaking countries in the field of tourism, while assisting the involved countries to train tourism professionals, in line with Macao’s goal to become a world centre of tourism and leisure as well as a commercial and trade cooperation service platform between China and Portuguese-speaking countries.

MGTO signed memoranda of understanding on cooperation in tourism with Cape Verde, Guinea-Bissau and Mozambique in 2010, with East Timor in 2013, Angola in 2015 and São Tomé and Príncipe in 2018. In addition, in 2016, the Secretariat for Social Affairs and Culture of the Macao Special Administrative Region Government signed a protocol on cooperation in tourism with the Ministry of Economy of Portugal.