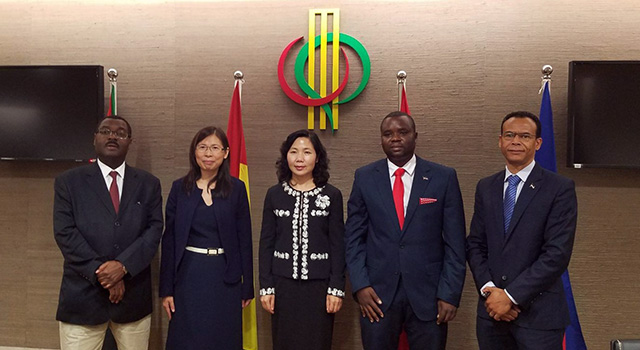 The Mayor of São Miguel, in Cape Verde, Mr. Herménio Celso Fernandes, visited on July 5 the headquarters of the Permanent Secretariat of the Forum for Economic and Trade Co-operation between China and Portuguese-speaking Countries (Macao) – also known as Forum Macao. He met representatives from the Permanent Secretariat of Forum Macao, including Secretary-General Ms Xu Yingzhen and Deputy Secretary-General Ms Echo Chan.

After welcoming Mr Fernandes, Ms Xu discussed with him the work developed by Forum Macao in several fields, including: trade and investment promotion; human resource training; and cultural exchanges. Ms Xu noted that Mr Fernandes’ visit to the headquarters of the Permanent Secretariat of the Forum Macao would help further exchanges between that body and Cape Verde, and would strengthen the friendly ties between the Participating Countries in Forum Macao.

Mr Fernandes thanked Ms Xu for her warm welcome, and said he was happy to exchange viewpoints with representatives from the Permanent Secretariat of Forum Macao. Mr Fernandes gave a presentation on investment projects currently taking place in São Miguel, and discussed the business opportunities offered by the city. He praised the dynamic development of Macao’s economy and the city’s role as co-operation platform between China and the Portuguese-speaking Countries.