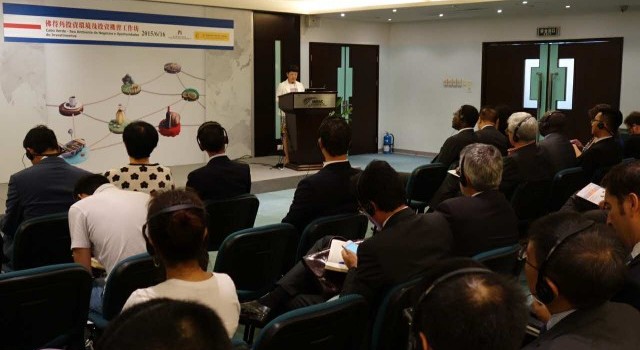 The Macao Trade and Investment Promotion Institute (IPIM) and the Permanent Secretariat of the Forum for Economic and Trade Co-operation Between China and Portuguese-speaking Countries (Macao) jointly organised a “Workshop on the business environment and investment opportunities in Cape Verde”.

The event was aimed at strengthening the role of Macao as a service platform for economic and trade co-operation between China and Portuguese-speaking Countries. It also helped to enhance regional economic co-operation and to promote the Lusophone markets among Macao’s small- and medium-sized enterprises (SMEs) and among local companies in Macao’s neighbouring regions.

The event was held on June 16 at IPIM’s Business Support Centre. It attracted more than 90 representatives of economic and commercial entities, entrepreneurs and investors, as well as participants from the construction, tourism, banking, law, retail, food and coffee trade, and construction material sectors.

Mário Vicente, Cape Verde’s delegate at the Permanent Secretariat of Forum Macao, was an honoured guest speaker for the workshop. He gave a presentation on the investment environment and the food market business opportunities in Cape Verde.

Other speakers at the workshop explained business opportunities in the fields of tourism, services, banking, financing services, agricultural products, manufacturing, basic industry and infrastructure. They also gave details of Cape Verde’s own investment projects, as well as explaining preferential policies for inward investment.

During the workshop, several Cape Verde products were on display, as well as practical information on how to invest in the country.

The organisers also arranged exchange sessions and consulting services for the participants.

Ms Lau also said she hoped that further contacts and exchanges would enhance mutual co-operation in the future.

There are many examples of past co-operation. A “Meeting of Entrepreneurs for the Economic and Trade Co-operation between China and the Portuguese-speaking Countries” was held in Cape Verde’s capital Praia in 2008 and again in 2012, on the island of Sal. As a co-organiser of the events, IPIM sent in each instance a delegation of Macao entrepreneurs.

Cape Verde’s Ministry of Tourism, Investment and Enterprise Development along with CI, is collaborating with an initiative known as the Economic and Trade Co-operation and Human Resources Portal Between China and Portuguese-speaking Countries.