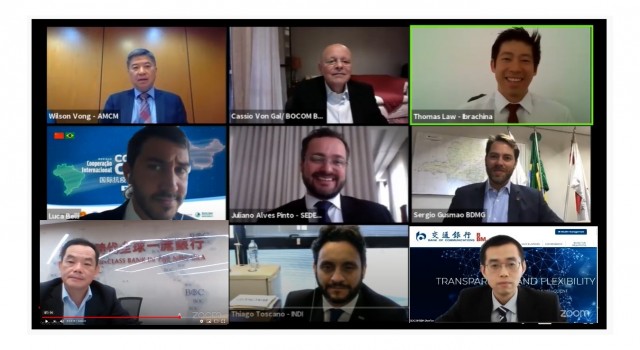 The sixth session of the series “Webinars on International Cooperation Against Covid-19” was successfully held on July 21. Titled “Financial cooperation to fight against Covid-19”, it featured experts from a number of fields, including: Mr Vong Lap Fong, Member of the Board of Directors of the Monetary Authority of Macao; and Mr Cai Chunyan, Deputy General Manager of the Bank of China Macau Branch.

The speakers in the Webinar exchanged insights about their contributions to the joint fight against the Covid-19 pandemic. They also talked about opportunities for international cooperation, and took part in a round of mutual assessment by the Webinar contributors regarding measures implemented in the economic and financial services sectors in response to the outbreak.

The current challenges affecting the city’s economy had further highlighted the need for economic diversification in Macao, said Mr Vong. In that regard, the Macao SAR Government had been seizing the development opportunities made available by the “Belt and Road” initiative, and had been supporting the development of the Guangdong-Hong Kong-Macao Greater Bay Area. Macao had also been strengthening links with the Portuguese-speaking Countries, in order to give full play to the city’s role as a financial services platform between China and the Portuguese-speaking Countries.

Additionally, Mr Vong said that the Macao Monetary Authority was dedicated to fostering the modernisation of the city’s financial sector. It was moving ahead with work to optimise existing infrastructure, regulatory frameworks, and training of qualified professionals, in order to support a stable and sustainable development of Macao’s economy.

Bank of China’s Mr Cai said that the Bank of China Macau Branch had rolled out multiple initiatives to support the work of the Macao SAR Government in relation to the pandemic. This was in order to contribute to the stabilisation of the city’s economy. The bank had also supported the SAR Government’s efforts regarding urgent procurement of anti-epidemic medical materials, and had strived to help ensure normality in financial operations in Macao. In doing so, Bank of China Macau Branch had played an important role in the stabilisation of the local financial sector, helping to calm the mood of the public during the course of the pandemic, he said.

The sixth session of the webinar series addressed a number of topics. They included: financial cooperation between China and Brazil to support the fight against Covid-19; and Covid-19 prevention measures implemented by the financial sector. The event further promoted Macao’s role as a financial services platform between China and Portuguese-speaking Countries, also contributing to international cooperation against the pandemic.