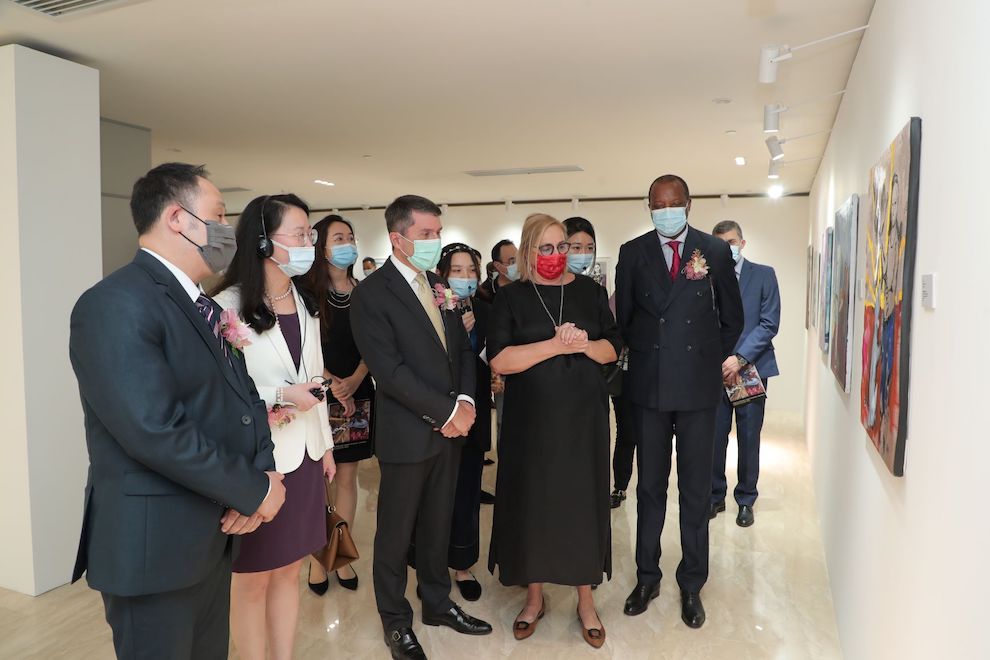 The inauguration ceremony for the “News from the Forest” exhibition, featuring work by Portuguese artist Ana Jacinto Nunes, was held at the China-Portuguese-speaking Countries Commercial and Trade Service Platform Complex on Friday, June 11, 2021, at 6pm.

Mr Espírito Santo mentioned in his speech that Macao had for centuries been a place acting as a bridge to link the various peoples, cultures and economies of the East and the West.

The establishment of Forum Macao – as a multilateral cooperation mechanism – aims not only to enhance trade and investment links between China and Portuguese-speaking Countries, but also to expand exchanges between all participating parties. The “Lusophone Polychromes” series of exhibitions aims to boost the close ties between China and Portuguese-speaking Countries, by strengthening and promoting friendship through the arts and culture.

Artist Ana Jacinto Nunes was born in 1973 in Lisbon, Portugal. Her work spans a wide range of techniques including painting, drawing, printing, sculpture, and ceramics. Her output has been shown around the world for the past 20 years: she has held solo exhibitions in art galleries in the United States, Germany and Portugal, as well as in Macao.

The artist has also taken part in creative projects in Belgium, Greece, Italy, Canada, Spain, the United States and Macao. Her work has attracted wide interest from people in various parts of the world.

She divides her time between Portugal and Macao. The culture in each place has had an influence on her work, as seen in the pieces on show in the “News from the Forest” exhibition.

Exhibition period: From June 11 to 27, Tuesday to Sunday, from 11am to 7pm; closed on Monday. Free admission.

Casa de Portugal em Macau is holding a series of workshops in tandem with the exhibition. Participants can learn how to produce traditional Portuguese handicraft accessories, under the instruction of seasoned artists, getting a taste of Portuguese culture.

All are welcome to enjoy the exhibition. To learn more about the 13th Cultural Week of China and Portuguese-speaking Countries, please visit the website semanacultural.forumchinaplp.org.mo.