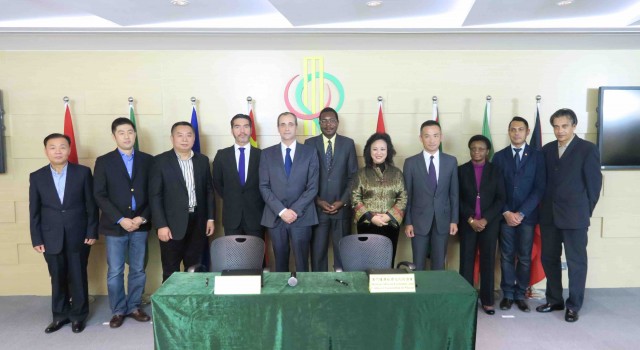 In order to strengthen cooperation in the field of education between China, Macao and Portuguese-speaking Countries, the Permanent Secretariat of the Forum for Economic and Trade Co-operation between China and Portuguese-speaking Countries (Macao), supported the signing of a cooperation agreement between the Portuguese Institute of the Orient (IPOR) and the Hainan-Macao Economic and Cultural Association (Hainan-Macao Association).

The signing ceremony took place on February 16 at the headquarters of the Permanent Secretariat of the Forum Macao.

The agreement aims to take advantage of Macau’s role as a platform between China and Portuguese-speaking Countries, as stated in the 4th Strategic Plan for Economic and Trade Cooperation, signed by the Ministers that attended the Ministerial Conference of Forum Macao in 2013.

The Director of IPOR, Mr João Neves Laurentino, and the Chairman of the Hainan-Macao Association, Mr Alfred Hon, signed the protocol.

The agreement aims to promote the teaching of Portuguese in Mainland China – and in particular in Hainan Province –, training and exchange of Portuguese-language teachers, the opening of new Portuguese courses and the production of teaching materials.

The signatory parties also seek to raise the quality of Portuguese teaching in Mainland China, promoting the development of exchanges in several sectors, with a focus on education and culture, in order to groom more bilingual professionals.

The signing ceremony was also attended by the President of the Hainan-Macao Association, Mr Lin Guangzhi, Vice-presidents Mr Guofeng and Mr Wang Ansong, as well as the association’s Secretary-General for the Portuguese Language, Mr Danilo Antunes.