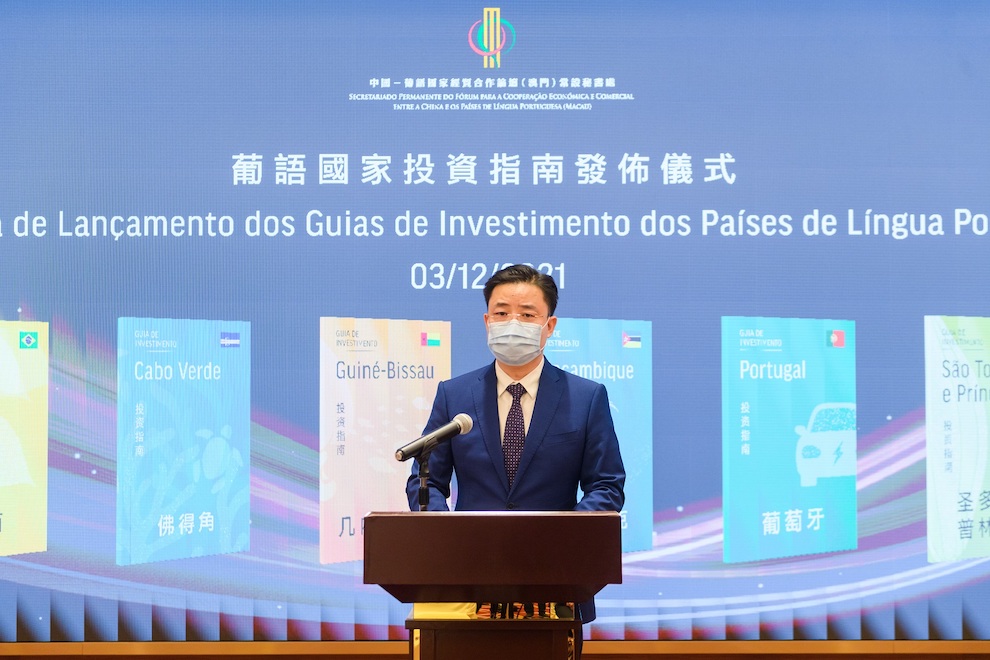 More than 60 guests attended the launch ceremony, including Deputy Director-General of the Commercial Office of the Economic Affairs Department of the Liaison Office of the Central People’s Government in the Macao SAR, Ms Li Huaying; Consul-General of Angola in the Macao SAR, Mr Eduardo Velasco Galiano; Consul-General of Mozambique in the Macao SAR, Mr Rafael Custódio Marques; Deputy Secretary-General of the Permanent Secretariat of Forum Macao, Mr Paulo Jorge Rodrigues do Espírito Santo; Vice-Consul of Portugal for Macao and Hong Kong, Ms Maria Carolina Lousinha; Macao Trade and Investment Promotion Institute Executive Director, Mr Sam Lei; Member of the Board of Directors of the Monetary Authority of Macao, Mr Vong Sin Man; and Principal Representative in Macao of the China Council for the Promotion of International Trade, Mr Cui Wenlong. Copies of the investment guides were handed out to guests, followed by the presentation of a promotional video.

Since 2011, the Permanent Secretariat of Forum Macao has on several occasions supported institutions in launching investment guides on Portuguese-speaking Countries, to boost Chinese companies’ investment in those countries. This year the Permanent Secretariat created and published its own pioneering edition, a series of guides on the eight Portuguese-speaking Countries: Angola, Brazil, Cabo Verde, Guinea-Bissau, Mozambique, Portugal, São Tomé and Príncipe, and Timor-Leste.

These guides contain up-to-date information of interest to Chinese investors in a concise, clear, and well-organised way. They include narrative excerpts, graphs and diagrams explaining incentives and benefits regarding various sectors, as well as material regarding guarantees and preferential policies for investors, and information on laws, regulations, and formalities, in addition to the tax regimes on investment.

In view of the continuous changes in the global business environment, and the restrictions on attracting cross-border financial resources imposed by the pandemic, the new investment guides aim to promote trade and investment from businesses in Mainland China and Macao, in Portuguese-speaking Countries, so that Macau can fully fulfil its role as a platform.

The digital version of the investment guides is available on the official website of the Permanent Secretariat of Forum Macao (https://www.forumchinaplp.org.mo). All are welcome to check the guides.