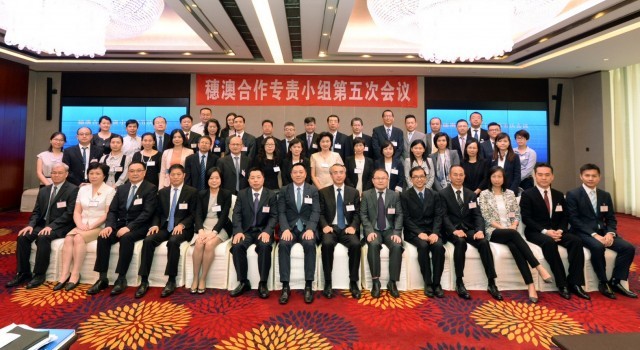 Promoting further the support for those young people in Guangzhou and Macao that wish to start a business – and support for employment opportunities in general – would be priorities of the next phase of Guangzhou-Macao cooperation, said today the Secretary for Economy and Finance, Mr Leong Vai Tac.

Macao’s Youth Entrepreneur Incubation Centre will contribute to intensifying such efforts, via a base for start-up companies in Nansha, Guangzhou. It will provide young entrepreneurs with consultancy and business matching services, commercial accommodation and other work facilities.

During the meeting, Guangzhou and Macao signed: the Agreement on strengthening cross-boundary trade and electronic commerce; the Letter of Intent on promoting cultural exchange; and the Agreement on developing projects by young entrepreneurs in Guangzhou’s Nansha and in Macao.

The Secretary said cooperation would also be extended to electronic commerce; to the financial sector; to MICE (meetings, incentives, conferences and exhibitions); and to cultural fields.

The Government expected to expedite cooperation in electronic commerce with Guangzhou enterprises, in order jointly to explore a greater number of international markets, especially opportunities in the Portuguese-speaking countries, said Mr Leong.

Guangzhou and Macao would soon develop a communication mechanism to foster cooperation relating to trade and electronic commerce. The two governments would explore the possibility of organising an event to encourage exchanges in the sector and to gain a better understanding on the prospects for such sector.

Financial leasing would be a major area in which Macao could develop its own distinctive financial services sector, Mr Leong said. With Macao’s network in the Portuguese-speaking countries and the city’s role as an offshore Renminbi clearance centre, the Government expected to be able to help Guangzhou entities to establish links with financial service providers in the Portuguese-speaking countries.

Regarding MICE and cultural cooperation, the Government’s aim in the long term was to establish – jointly with Guangzhou – a world-class ‘signature’ event in this field. In the near term, the Government would initiate research, join overseas exhibitions, and organise official visits to other places in order to gain a better understanding of the trends in other markets.

Other topics discussed during the meeting included: occupational education; and the setting up of a mechanism for the conservation of non-tangible cultural heritage.

The Guangzhou-Macao Cooperation Task Force was set up in 2011, with the aim of planning the tightening of Macao-Nansha ties, as foreseen in the Framework Agreement on Cooperation Between Guangdong and Macao.