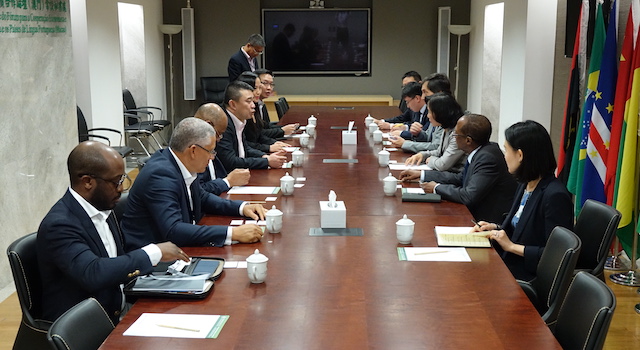 The Secretary-General of the Permanent Secretariat of Forum Macao, Ms Xu Yingzhen, received on October 18 a delegation composed of representatives from the Angolan National Diamond Trading Co (Sodiam) and from the Macao Diamond and Gem Exchange. Forum Macao Deputy Secretary-General Mr Rodrigo Brum and Angola’s Representative to the Permanent Secretariat of Forum Macao, Mr Belarmino Barbosa, also attended the meeting.

Secretary-General Ms Xu noted that in recent years Forum Macao had consistently been promoting the implementation of Macao’s “One Platform, Three Centres” policy. It had also fostered Macao’s role as a financial services platform serving China and the Portuguese-speaking Countries, namely by supporting: the city’s development as a Renminbi Clearing Centre for Portuguese-speaking Countries; and the development of specialised leasing, wealth management and export credit insurance services. Ms Xu also mentioned that the headquarters of the China-Portuguese-Speaking Countries Co-operation and Development Fund had been moved to Macao.

She noted that economic and trade relations between China and Angola had been developing in a positive direction. Ms Xu particularly highlighted the potential of the Chinese market for products from Angola. She said that – under such favourable circumstances – Sodiam could make the most of Macao’s advantages as a cooperation platform, namely to collaborate with the Macao Diamond and Gem Exchange and achieve solid outcomes. This, Ms Xu said, would contribute to more dynamic economic and trade cooperation between China and the Portuguese-speaking Countries.

The Chairman of the Macao Diamond and Gem Exchange, Mr Su Wei, made a brief presentation at the meeting regarding the exchange’s cooperation with Sodiam, a company owned by the Angolan state. He said that the two sides were keen – with support from the Macao SAR Government – to achieve solid outcomes regarding such collaboration, including the signing of a strategic cooperation deal.

The Chairman of Sodiam, Mr Eugénio Bravo da Rosa, said that – in view of Macao’s language advantages compared to other places, and the city’s links with Portuguese-speaking Countries – Sodiam paid great importance to the business environment in Macao, as well as to the Mainland China market. He added that the company’s next step would be – in collaboration with the Government of Angola – to ensure successful cooperation with the Macao Diamond and Gem Exchange.