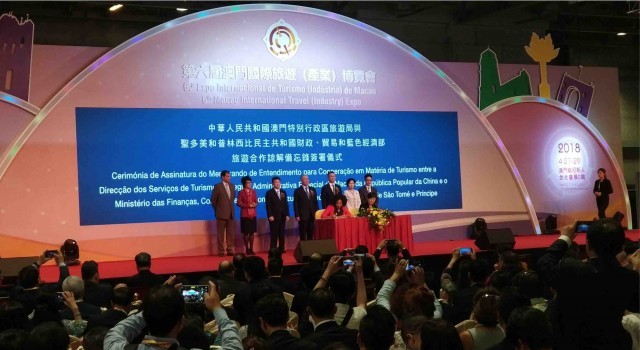 With the support of the Permanent Secretariat of Forum Macao, the Macao Government Tourism Office (MGTO) and the Ministry of Finance, Commerce and Blue Economy of São Tomé and Príncipe signed a Memorandum of Understanding on Tourism Cooperation.

Forum Macao’s Secretary-General, Ms Xu Yingzhen, attended the opening ceremony of the 6th Macao International Travel (Industry) Expo. Ms Xu also witnessed the signing ceremony of the Memorandum of Understanding between the MGTO and the Ministry of Finance, Commerce and Blue Economy of São Tomé and Príncipe.

Forum Macao’s Ms Xu accompanied the Vice Chairman of China National Tourism Administration, Mr Li Shihong; the Deputy Director-General of the Liaison Office of the Central People’s Government in the Macao SAR, Mr Yao Jian; the Acting Commissioner of the Office of the Commissioner of the Ministry of Foreign Affairs of the People’s Republic of China in the Macao SAR, Ms Wang Dong; the MGTO Director, Ms Maria Helena de Senna Fernandes; the Director General of Tourism and Hospitality of São Tomé and Príncipe, Ms Mírian Daio, among other guests, in a visit to the Portuguese-speaking Countries’ pavilion. The visit was an opportunity to exchange views with the guests.

The content of the Pavilion was enriched with more elements from the Portuguese-speaking Countries. The Pavilion featured the latest tourism developments in those countries. It included product showcases, photographs, videos, special publications and other promotional materials. Bilingual staff were available at the Pavilion to facilitate business exchanges.