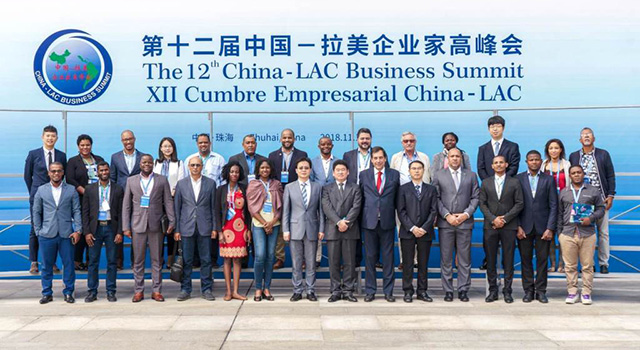 Deputy Secretary-General of the Permanent Secretariat of Forum Macao Mr Ding Tian and Deputy Secretary-General Mr Rodrigo Brum joined the “12th China-Latin America and the Caribbean Business Summit”, from October 31 to November 2, to boost economic and trade cooperation between China, Latin America and the Caribbean, and Portuguese-speaking Countries. The Deputy Secretaries-General led a 40-strong delegation composed of people from the Permanent Secretariat of Forum Macao, as well as participants in the “Seminar on Intellectual Property Protection for Portuguese-speaking Countries”.

The delegation travelled to the Zhuhai International Convention & Exhibition Centre, where the event took place, and also visited the China-LAC Trade Exhibition. A seminar on the protection of intellectual property was also held.

The “12thChina-Latin America Business Summit” was jointly organised by the China Council for the Promotion of International Trade, the Guangdong Provincial Government, the People’s Bank of China and the Inter-American Development Bank. The Summit’s main topics were, international cooperation within the “Belt and Road” initiative and new Sino-Latin American economic and trade development opportunities.

Strengthening cooperation and exchange of ideas in the area of intellectual property rights contributed to the joint development of China and the Portuguese-speaking Countries as well as the countries and place along the Belt and Road. Mr Ding additionally said he hoped all involved could make extensive use of Macao as a platform in order to further cooperation. He also pledged that the Permanent Secretariat would continue to focus on its bridging role and advancing links between Chinese companies and those from Portuguese-speaking Countries, in order to promote fruitful, multi-party cooperation.