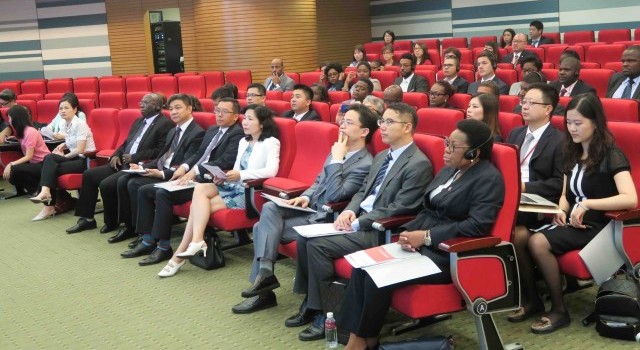 Representatives respectively from the Bank of China, Macau Branch and the China Foreign Exchange Trade System delivered detailed introductions respectively into the RMB clearing business in Macao and the interbank market in Mainland China.

Professor Cao Yuanzheng, Chief Economist of Bank of China International Ltd, gave a presentation during the Seminar – at the invitation of the organisers – on the progress of the internationalisation of RMB. The Seminar was organised before the opening of the 8th International and Infrastructure Investment and Construction Forum. The Bank of China, Macau Branch also took the opportunity to explain to participants the importance of Macao in the “Belt and Road” The bank hoped to provide financial assistance, in collaboration with the financial sectors of Portuguese-speaking Countries, for infrastructure construction in China and Portuguese-speaking Countries and to boost cooperation on industrial capacity enhancement.