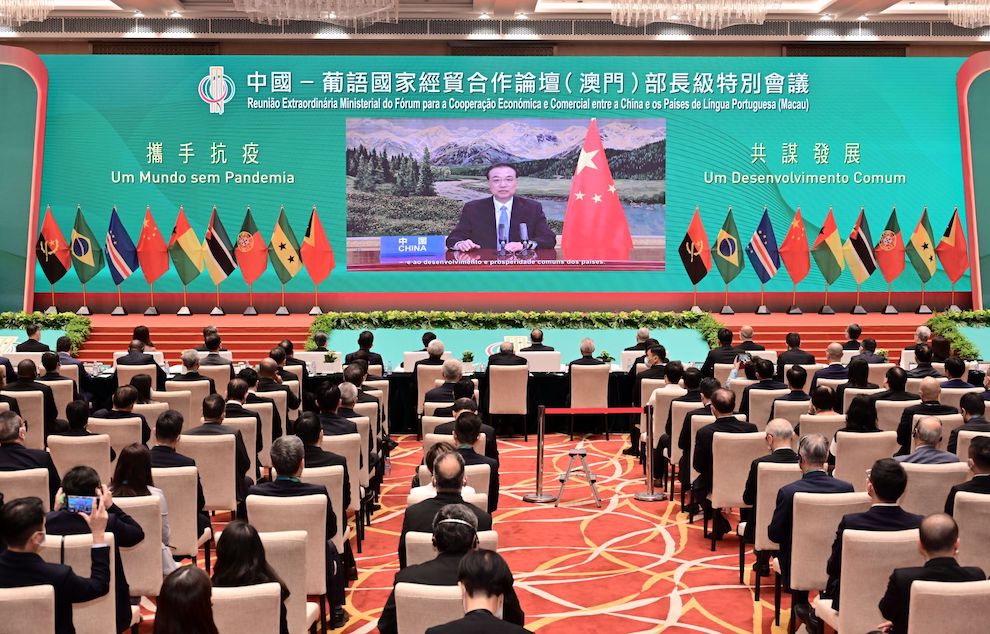 The opening ceremony began with a speech via video link, by the Premier of the State Council of China, Mr Li Keqiang, in which he congratulated Forum Macao for its achievements before wishing the Meeting every success. Mr Li put forward proposals for boosting ties between China and Portuguese-speaking Countries. He also called for all member countries to defend peace and stability, and to promote development and prosperity, as well as broaden solidarity and cooperation, in order to overcome the pandemic as soon as possible. He also called for them to adhere to openness and cooperation in order to drive economic recovery.

During the Meeting, China’s Minister of Commerce, Mr Wang Wentao, as well as the representatives of the governments of the Portuguese–speaking Countries responsible for Forum Macao affairs, delivered speeches on ways to boost pandemic prevention exchanges, and promoting economic recovery in a post-pandemic era. All parties agreed to strengthen dialogue on cooperation against the pandemic, and on post-pandemic economic recovery, in order to combine efforts in the fight against COVID-19, in pursuit of mutual gains and prosperity. In addition, the participating members called for greater dynamism in Macao’s key role as a platform, including cooperation in the fight against the pandemic.

The representatives of the participating countries signed the Joint Declaration of the Extraordinary Ministerial Meeting, and issued a declaration approving the official accession of the Republic of Equatorial Guinea as the 10th member country of Forum Macao.

More than 100 participants in different places, including high-level government representatives, officials from the authorities of the participating countries, the diplomatic corps of the Portuguese-speaking Countries accredited in China, as well as media and representatives of various sectors, attended the meeting and its related activities.

CREG tunneling machine will be sent to Brazil