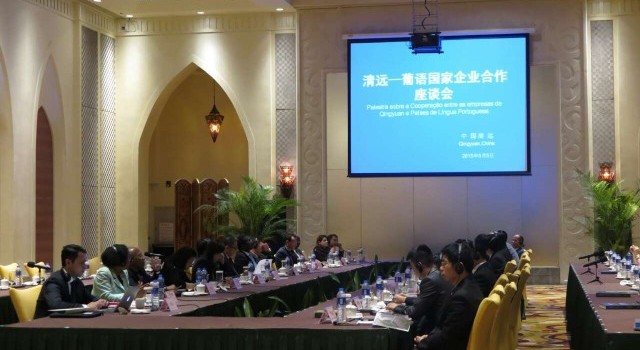 A delegation of the Permanent Secretariat of the Forum for Economic and Trade Co-operation between China and Portuguese-speaking Countries (Macao), also known as Forum Macao, visited the city of Qingyuan and the Nansha district of Guangzhou, in Guangdong Province, between May 5 and 6.

The aim was to strengthen exchanges between Portuguese-speaking Countries and companies from Mainland China, improve awareness about Qingyuan and the Nansha development zone in Guangzhou, and to promote Macao as a service platform, as well as to enhance the work of Forum Macao.

On the first day, the delegation visited the Qingyuan Planning Exhibition Hall to learn about the planning policies and development of the city. That was followed by a Seminar on the Co-operation between companies from Qingyuan and Portuguese-speaking Countries. The seminar was supported by the Government of Qingyuan.

Among the seminar attendees were the Deputy Director-General of the Economic Affairs Department of the Liaison Office of the Central People’s Government in the Macao SAR, Mr Kou Ming; the Deputy Governor of the city of Qingyuan, Mr He Guosen; as well as representatives from the Office for Hong Kong and Macao Affairs, and trade and tourism officials.

During the seminar, a representative of the city government did a presentation on Qingyuan’s economy and its investment environment. The Secretary-General of the Permanent Secretariat of Forum Macao, Mr Chang Hexi, also briefed attendees on the roles of Forum Macao, and of Macao generally, as service platforms between China and Portuguese-speaking Countries.

The next day, the delegation went to Nansha for a visit to Guangzhou Nansha Special Economic Zone.

The visit also aimed to promote Forum Macao’s work and the role of Macao as a platform to promote pragmatic co-operation between companies from Mainland China, Macao and Portuguese-speaking Countries.

The visit to the Nansha Special Economic Zone allowed delegates of the Portuguese-speaking Countries to have a broader understanding of the new policies and development planned for the China (Guangdong) Pilot Free Trade Zone in Nansha, in order to consolidate co-operation between the two parties.