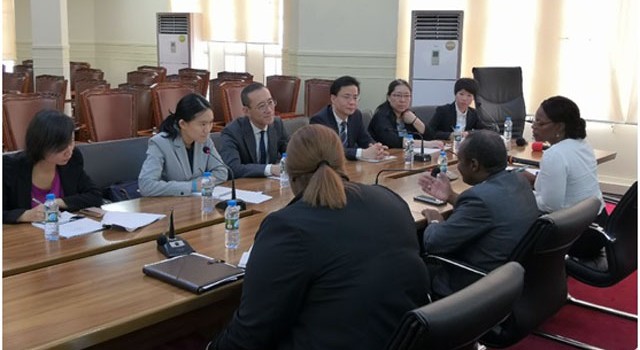 Deputy Secretary-General of the Permanent Secretariat of Forum Macao Mr Ding Tian headed a working group joining a delegation visiting Angola and Portugal from November 7 to 12. The delegation was led by the Director General of the Department of Taiwan, Hong Kong and Macao Affairs at the Chinese Ministry of Commerce Mr Sun Tong.

During the Angola visit, the delegation held a meeting with the Director-General for Asia and Oceania of the Republic of Angola’s Ministry of External Relations, Mr Agostinho André de Carvalho Fernandes. The two sides exchanged views on the achievements of Forum Macao over the past 15 years, in terms of Macao’s role as a platform for business and trade cooperation between China and Portuguese-speaking Countries. Also discussed was the upcoming 6th Ministerial Conference of Forum Macao. Both sides at the meeting agreed to work together to promote further the economic and trade relationship between the two countries and the development of Forum Macao, as well as Macao as a platform.

The delegation additionally visited the Chinese Embassy in Angola; the Chinese-financed Higher Institute of International Relations project; and had an exchange session with representatives in Angola of China-based firms.

During the Portugal leg of the tour, the delegation met the Director-General of Economic Activities of the Ministry of Economy Ms Fernanda Ferreira Dias. Both sides gave special recognition to the importance of Sino-Portuguese economic and trade relations, and the important role of Forum Macao and the Macao platform in the development of economic and trade cooperation between China and Portugal.

The working group of the Permanent Secretariat of Forum Macao were scheduled to travel to São Tomé and Príncipe after the visit to Portugal.

Higer will install an electric bus factory in Brazil

CPFL organizes a campaign to raise knowledge of the electrical network