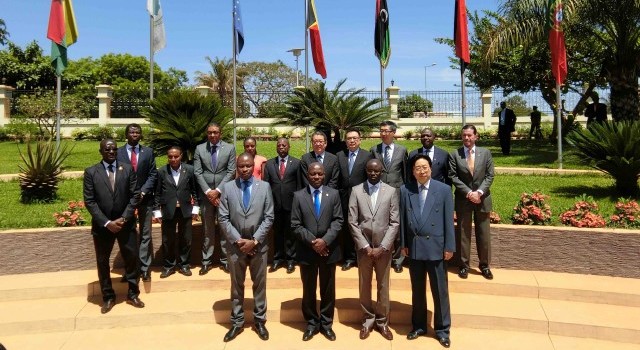 The two-day Business Meeting between China and Portuguese-speaking Countries successfully concluded on April 10 in Bissau, the capital city of Guinea-Bissau.

A total of more than 300 guests were at the event, including approximately 150 representatives of companies from Angola, Brazil, Cape Verde, China, Guinea-Bissau, Mozambique and Portugal.

The meeting was divided into panels with each one focusing on specific topics. The panel for economic development concentrated on the development of the agriculture, agro-industries, fisheries and tourism sectors. Other panels covered discussions on investment, infrastructure development, energy and mining.

A delegation of the Permanent Secretariat of the Forum for Economic and Trade Co-operation between China and Portuguese-speaking Countries (Macao), also known as Forum Macao, attended the Business Meeting between China and Portuguese-speaking Countries. The Secretary-General of the Permanent Secretariat of Forum Macao, Mr Chang Hexi, led the delegation.

On the visit to Bissau, the delegation of the Permanent Secretariat of Forum Macao met with China’s Ambassador to Guinea-Bissau, Mr Wang Hua. The delegation also had meetings with Guinea-Bissau’s Minister of Economy and Finance, Mr Geraldo Martins, and with the Minister of the Presidency of the Council of Ministers and Parliamentary Affairs, Mr Malal Sané.

The meetings enabled an exchange of information about the work done by Forum Macao and helped the participants understand how to make use of the cross-border service platform provided by Macao.