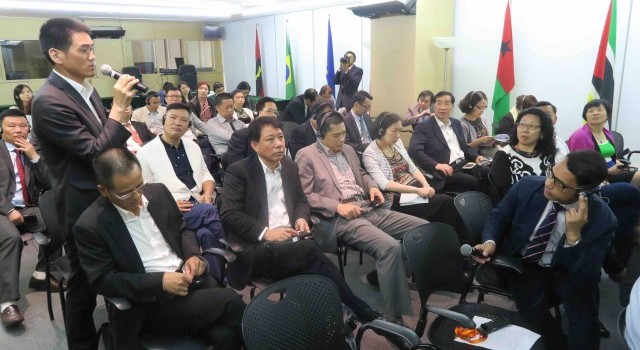 A delegation from the industrial sector of Panyu District, in Guangzhou, on May 10 paid a visit to the headquarters of the Permanent Secretariat of the Forum for Economic and Trade Co-operation between China and Portuguese-speaking Countries (Macao), also known as Forum Macao. The Chairman of Panyu District Committee of the Chinese People’s Political Consultative Conference, Mr Li Guanghang, headed the delegation.

During the visit, representatives from both sides exchanged opinions on how further to make use of the trade platform offered by Macao and the services of Forum Macao to boost exchanges and co-operation between China and Portuguese-speaking Countries.

The Deputy Secretary-General of the Permanent Secretariat of Forum Macao, Mr Vicente de Jesus Manuel, mentioned the close co-operation ties between China and Portuguese-speaking Countries, highlighting the role that Macao and Forum Macao play in connecting the two sides.

During the visit, the Delegates of Portuguese-speaking Countries at the Permanent Secretariat of Forum Macao made a brief presentation about the investment environment and business opportunities in their respective countries.

The visit ended with an exchange session between the Delegates and the members of the delegation from Panyu.