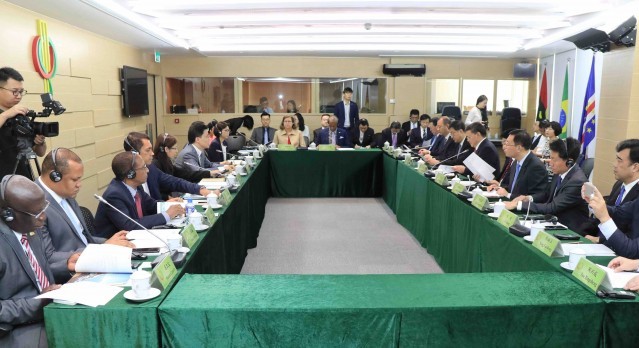 A delegation of the Municipal Government of Qingdao, led by Mayor Meng Fanli, visited on August 14 the Permanent Secretariat of the Forum for Economic and Trade Co-operation between China and Portuguese-speaking Countries (Macao).

The Deputy Secretary-General of the Permanent Secretariat, Mr Ding Tian, and representatives of the Permanent Secretariat met with the visiting delegation. The two parties exchanged opinions regarding the establishment of a closer relationship, how to make use of Macao’s advantages as a cooperation platform between China and Portuguese-speaking countries, and the enhancement of collaboration between Tianjin and those countries.

The Deputy Secretary-General Mr Ding welcomed the Qingdao delegation and gave it a briefing about the work of the Permanent Secretariat in the fields of trade and investment, capacity production, human resource training, and promotion of cultural exchanges. Mr Ding stated that the Permanent Secretariat intended to strengthen cooperation with Qingdao, making use of Forum Macao’s mechanism for multilateral ties and of Macao’s overall role in enhancing cooperation between China and Portuguese-speaking Countries.

Mayor Meng Fanli made a presentation about the municipality’s business environment, noting that Qingdao played two roles in the national “Belt and Road” initiative, namely: “Major City in the New Economic Corridor between Asia and Europe”; and “Strategic Hub for Maritime Cooperation”.

In addition, he said, Qingdao was in the process of establishing an “Industrial and Economic Cooperation Park between Europe and Asia”, in order to boost – under the framework of the “Belt and Road” initiative – economic and trade cooperation between the two sides. Mr Meng also said that he hoped that the Permanent Secretariat of Forum Macao could help strengthen cooperation in the areas of trade and e-commerce between the industrial park and Portuguese-speaking Countries.

During the meeting, the members of the visiting delegation exchanged views with the representatives of Forum Macao regarding trade and economic cooperation.

After the meeting, the two sides signed a “Memorandum of Support to the Qingdao Municipality for the Promotion of Cooperation in Capacity Production between the ‘Industrial and Economic Cooperation Park between Europe and Asia’ under the ‘Belt and Road’ Initiative”. The memorandum was signed by Mr Ding, representing the Permanent Secretariat of Forum Macao, and the Director of the Trade Bureau of the Qingdao Municipality, Mr Ma Weigang, and the Mayor of Jiaozhou City, Dr Zhang Youyu.

Under the Memorandum of Cooperation, both sides will promote further cooperation in the fields of investment and trade, as well as organise study visits and seminars on capacity production for business delegations.