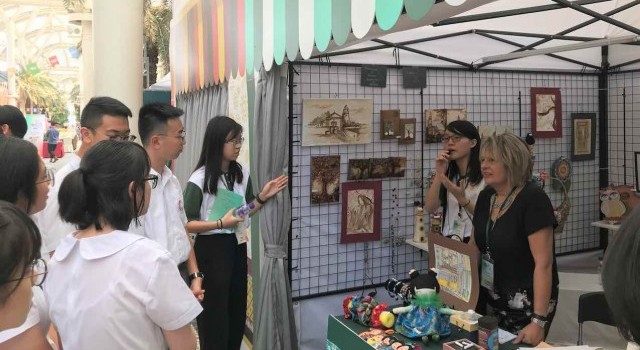 The organisers invited students of Portuguese language from a number of secondary and primary schools to participate in the activities of the Cultural Week. This was in order for them to experience the relevant cultures and deepen their knowledge of the development of China and of Portuguese-speaking Countries. The students went to Macau Fisherman’s Wharf – where the Cultural Week took place – to visit the Handicraft Fair, interact with artisans from various countries, and participate in traditional games offered at booths at the venue.

Guided tours and on-site interpretation were provided for the visiting students. The tour gave them the opportunity to observe the fruits of the cultural exchanges and cooperation between China and Portuguese-speaking Countries. By participating in such activities, students had the opportunity to observe first-hand – outside their classrooms – Macao’s platform role and were inspired to learn the Portuguese language. Participating students said the visit enabled them to learn more about the culture of China and of Portuguese-speaking Countries, contributing to a broadening of their horizons.

Two third-year students from MPI’s Chinese-Portuguese/Portuguese-Chinese Translation and Interpretation Programme had the role of welcoming the student delegation to the venue. They also acted as tour guides and translators, displaying their knowledge of Portuguese. They said that via such endeavours, they were able to practise their communication skills; and more importantly, gain a better understanding and knowledge of Macao’s platform role. The volunteers said there was a favourable environment in Macao for learning Portuguese, and plenty of opportunities to get to know more about Portuguese-speaking Countries. They said additionally that they hoped to contribute to the construction of Macao as an effective platform between China and Portuguese-speaking Countries.