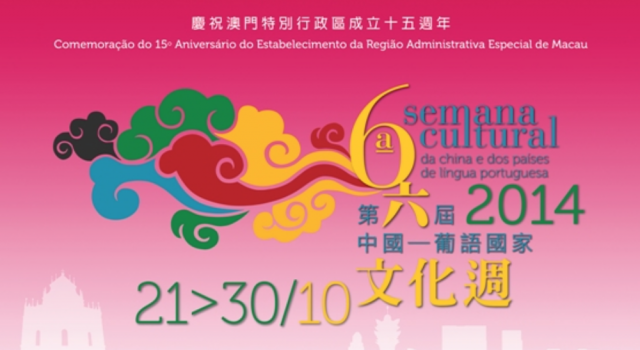 The 6th Cultural Week of China and Portuguese-speaking Countries 2014 will take place between October 21 and October 30. The event is organised by the Forum for Economic and Trade Co-operation between China and Portuguese-speaking Countries (Macao), also known as Forum Macao, with support from the Institute for Civic and Municipal Affairs and the Macao Government Tourist Office.

A number of activities will take place in various parts of the city, including the Carmo area in Taipa, Senado Square, the Ruins of St. Paul, D. Pedro V Theatre, the residence of the Consul-General of Portugal in the Macao SAR (the former Hotel Bela Vista), Macao Tower, Rui Cunha Foundation Gallery and the Gallery of Macao Military Club.

The scheduled activities include cultural performances and displays of the arts. The aim is to showcase Chinese and Lusophone culture to Macao residents and tourists to the city, thus strengthening the role of the territory as a platform between China and Portuguese-speaking countries.