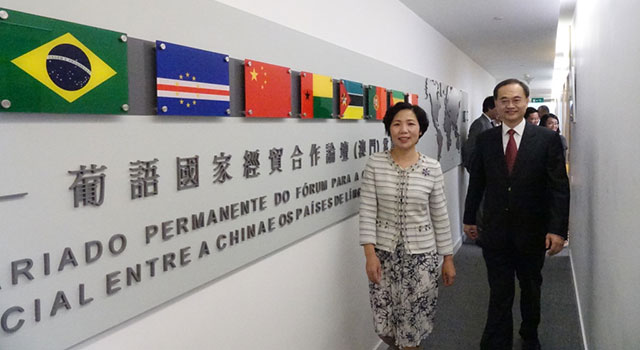 Ms Xu extended a warm welcome to the delegation and thanked the Ministry of Foreign Affairs regarding its support for the Permanent Secretariat of Forum Macao. The Secretary-General delivered a brief introduction on the operation and development of Forum Macao, including its work to foster cooperation between China and Portuguese-speaking Countries across several areas, including: economic and trade affairs; industrial capacity; collaboration between cities; human resources; cultural exchanges; and promotion of Macao’s role as a service platform.

Ms Xu’s remarks also covered major activities and events organised to mark the 15th anniversary of Forum Macao. Each member of the Permanent Secretariat additionally delivered a brief presentation to the visiting delegation.

Commissioner Ye acknowledged the role Forum Macao had played in consolidating and enhancing Macao’s status as a service platform between China and Portuguese-speaking Countries. During Macao’s rapid development over the past 15 years – after its return to Chinese administration – Forum Macao had successfully promoted trade and investment collaboration between China and Portuguese-speaking Countries, and also increased global recognition of Macao’s role as a cooperation platform, said Commissioner Ye.

As a part of China’s foreign affairs work, the country would continue to deepen cooperation with Portuguese-speaking nations, in order to advance effort on the ‘Belt and Road’ initiative and help reform the global governance system, Commissioner Ye added.