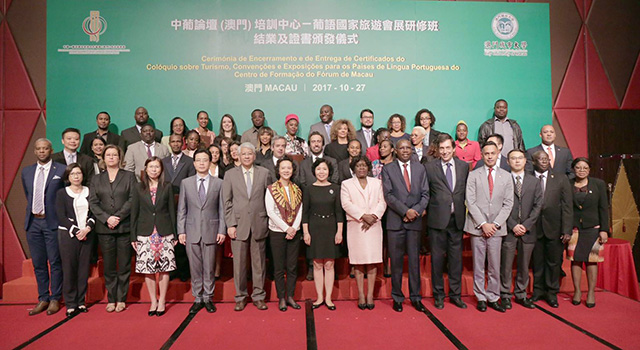 The closing ceremony and certificate presentation for the “Workshop on Tourism and the MICE Industry for Portuguese-speaking Countries” was held at the Grand Ballroom of Hotel Grand Lisboa on October 27. The workshop was hosted by the Training Centre of the Forum for Economic and Trade Co-operation between China and Portuguese-speaking Countries (Macao), and administered by the City University of Macau.

Several officials attended the closing ceremony, including: the Secretary-General of the Permanent Secretariat of Forum Macao, Ms Xu Yingzhen; the Deputy Director-General of the Economic Affairs Department and Head of the Commercial Office of the Economic Affairs Department of the Liaison Office of the Central People’s Government in the Macao SAR, Ms Chen Xing; the Consul-General of Angola in the Macao SAR, Ms Sofia Pegado da Silva; the Consul-General of Mozambique in the Macao SAR, Mr Rafael Custódio Marques; the Rector of the City University of Macau, Professor Zhang Shuguang; and the Representatives of the Portuguese-speaking Countries in Forum Macao.

Forum Macao’s Ms Xu, City University’s Prof. Zhang, and Mr Osvaldo António – the latter acting as representative of the participants in the workshop – each delivered speeches during the event.

This was the fourth workshop hosted by the Training Centre of Forum Macao so far this year. The programme was held in Macao, running from October 16 to 29. Close to 30 participants took part in the workshop, namely representatives from government bodies, trade associations and companies from, respectively, Angola, Brazil, Cape Verde, Guinea-Bissau, Mozambique, Portugal, São Tome and Príncipe, and East Timor.

The workshop served as an educational platform for the representatives from the countries participating in Forum Macao. It included talks on several topics, including: the opportunities and challenges under the “Belt and Road” initiative; sustainable development of the Pearl River Delta; the development of Hengqin Island and the development of tourism and the meetings, incentives, conferences and exhibitions (MICE) sector in Macao; Macao’s role as a cooperation platform; the positioning of Macao as a World Centre of Tourism and Leisure; policies and opportunities in the fields of tourism and MICE; the MICE sector as a way to promote Macao’s moderate economic diversification; and policies to support development of small- and medium-sized enterprises.

The workshop’s programme featured visits to the facilities of: the Permanent Secretariat of Forum Macao; the Macao Trade and Investment Promotion Institute; the Macao Government Tourism Office; and Macao’s Gaming Inspection and Coordination Bureau. Participants also had the opportunity to visit some of the city’s UNESCO World Heritage sites, and to tour facilities related to tourism and the MICE sector in Macao.

In addition, the participants joined exchange sessions with representatives from trade chambers and other bodies related to tourism and the MICE sector. They also attended the 22nd Macao International Trade and Investment Fair (MIF); the 2017 Portuguese-speaking Countries Products and Services Exhibition (Macao) – 2017 PLPEX; and the Angola-Guangdong-Macao Trade and Investment Forum, among other events in Macao.

The workshop sought to broaden the knowledge of participants from the Portuguese-speaking Countries on tourism and the MICE sector in Mainland China and Macao. It also aimed to strengthen cooperation and exchanges in those fields. Other goals included raising participants’ understanding of: the role of Macao as a commercial and trade cooperation service platform between China and Portuguese-speaking Countries; Macao’s positioning as a World Centre of Tourism and Leisure; and the activities of Forum Macao.