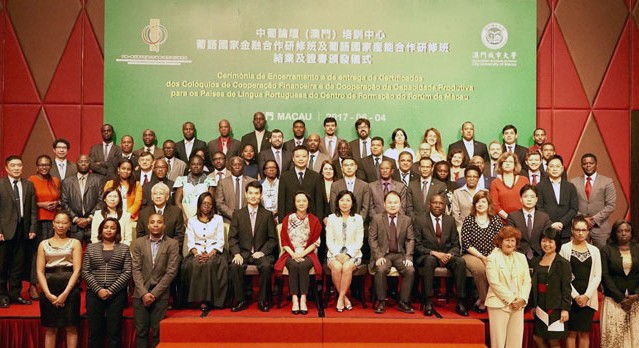 Also among the attendees were: the Consul-General of Mozambique in the Macao SAR, Mr Rafael Custódio Marques; the Vice-Consul of Angola in the Macao SAR, Ms Maria Cezaltina Monteiro da Costa; the Economic Counsellor of the Embassy of Portugal in China and AICEP Representative in Beijing, Ms Alexandra Ferreira Leite; and Professor Zhang Shu Guang, rector of the City University of Macau.

The two workshops were held from May 22 to June 4 in Jiangsu and Macao respectively. Nearly 50 officials and technical experts from Brazil, Cape Verde, Guinea Bissau, Mozambique, Portugal and São Tomé and Príncipe took part in the workshops. It was the first time representatives from São Tomé and Príncipe had taken part in workshops organised by the Training Centre of Forum Macao.

Each workshop had two phases, with the first phase taking place in Jiangsu, including visits to, and exchanges with, local companies. The second phase took place in Macao.

The workshops served as an educational platform for the representatives from the countries participating in Forum Macao. During the workshop attendees’ stay in Jiangsu, several visits and meetings with local companies were organised. There were also two sessions of the “Meeting on Capacity Production Cooperation between Jiangsu and Portuguese-speaking Countries” that were held respectively in Nanjing and Changzhou.

The workshops included seminars on: the “Belt and Road” initiative; cooperation on capacity production and finance; and investment channels for small- and medium-sized enterprises. The participants also had the opportunity to attend the 8th International Infrastructure Investment and Construction Forum, as well as a “Seminar on Production Capacity and Financial Cooperation between China and Portuguese-speaking Countries”.

The workshops have fostered exchanges and cooperation between Mainland China, Macao and Portuguese-speaking Countries in the areas of finance and capacity production. These activities also helped participants to gain a better understanding of Macao’s role as a commercial and trade cooperation service platform between China and Portuguese-speaking Countries.