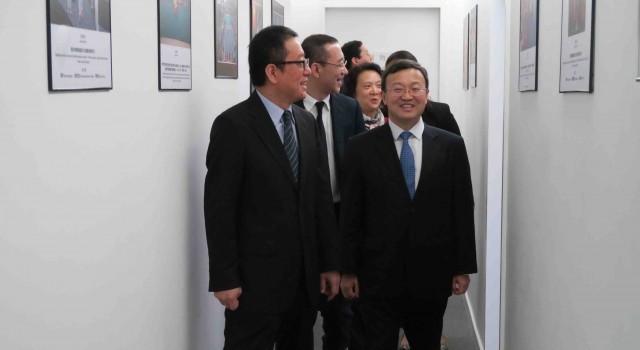 An official delegation led by China’s Vice Minister of Commerce Wang Shouwen visited on November 28 the Permanent Secretariat of the Forum for Economic and Trade Co-operation between China and Portuguese-speaking Countries (Macao), also known as Forum Macao.

The visit was aimed at exchanging ideas and defining future goals. The delegation also met with all the members of the Permanent Secretariat.

The Secretary-General of the Permanent Secretariat of Forum Macao, Mr Chang Hexi, welcomed the Vice Minister of Commerce and his delegation. He also thanked the Chinese Ministry for its guidelines and support throughout the years.

Mr Chang delivered a brief presentation on Forum Macao’s main projects and the work completed by its Permanent Secretariat in 2015. The work included: the promotion of trade; co-operation regarding the training of human resources; and cultural exchanges.

Mr Wang said the Ministry of Commerce pays special attention to Forum Macao’s multilateral mechanism and the deepening of Macao’s role as a platform.

The Vice Minister encouraged the members of the Permanent Secretariat to continue with their work and to explore potential opportunities for further co-operation. He also wished success to the preparatory work for the 5th Ministerial Conference, which will be held next year.

Mr Wang added he hoped the 5th Ministerial Conference would be guided by a pragmatic spirit and could lead to more success.