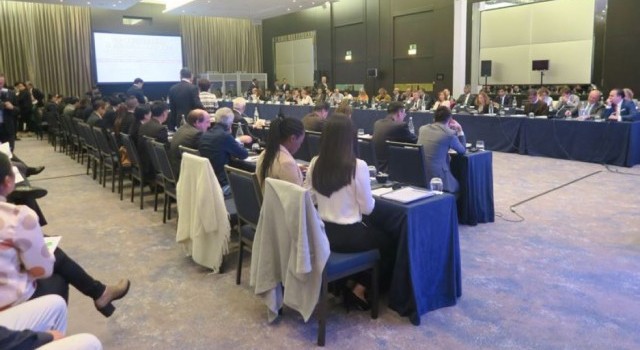 The “China-Portugal Enterprises Economic and Commercial Meeting: Cooperation on Trade, Investment and Production Capacity within Forum Macao” has been held in Lisbon on November 20, followed by a trade exchange cocktail.

The event was organised by the Permanent Secretariat of the Forum for Economic and Trade Co-operation between China and Portuguese-speaking Countries (Macao) and the Macao Trade and Investment Promotion Institute, with the support of the Embassy of China in Portugal, Macao’s Economic and Trade Delegation in Lisbon, the Department of Commerce of Jiangsu Province, and China Chamber of Commerce of Import and Export of Foodstuffs, Native Produce & Animal By-Products.

China’s Vice-Minister of Commerce Ms Gao Yan, who was visiting Portugal, China’s Ambassador to Portugal Mr Cai Run, and Portugal’s Secretary of State of Internationalisation, Mr Eurico Brilhante Dias, gave a speech at the meeting. A total of 175 representatives from Mainland China, Portugal and Macao companies from the food processing, trade, digital technology and production capacity sectors also took part in the event.

China’s Vice-Minister of Commerce Ms Gao Yan recalled that in October 2016 Macao successfully held the 5th Ministerial Conference of the Forum for Economic and Trade Co-operation between China and Portuguese-speaking Countries (Macao), where the “Belt and Road” and the “Uniting Efforts towards Co-operation”, “Building the Platform Together”, and “Sharing the Benefits of Development” strategies continued to gain consensus.

Within the Forum Macao mechanism, economic and trade cooperation between China and Portuguese-speaking Countries has held up against the international financial crisis and a steep decline in the price of consumer goods, registering a steady increase in trade and investment volume, as well as positive cooperation in various areas. Macao’s role as an important platform for cooperation between China and the Portuguese-speaking Countries is becoming increasingly evident.

China wants to firmly proceed with its policy of opening up, actively promoting international cooperation through the “Belt and Road” initiative. In the next 15 years, China will import goods worth US$24 trillion, and its direct investment overseas should reach US$2 trillion, creating huge trade cooperation opportunities for all countries, including Portuguese-speaking Countries. In this respect, China’s Vice-Minister of Commerce Ms Gao Yan encouraged Portuguese-speaking Countries to better make use of the Macao platform advantages, as well as promote even more economic and trade cooperation within Forum Macao, to achieve mutual benefit and win-win outcomes.

The Secretary-General of the Permanent Secretariat of Forum Macao, Ms Yu Yingzhen, emphasised in her speech that this Meeting aimed at actively implementing the spirit of the 5th Ministerial Conference of Forum Macao, which means: firstly, increase imports and exports; secondly, launch cooperation on production capacity; and finally, make use of the Macao platform, creating better cooperation opportunities for companies from China and the Portuguese-speaking Countries.

The Secretary-General also recalled that economic and trade cooperation between China and Portugal has been developing steadily. Chinese companies still have a lot of interest in investing in Portugal, with investments already successfully carried out in energy, electricity, telecommunications and financial projects. Both sides have also initiated trilateral cooperation with positive results. In May 2017, the President of the People’s Republic of China, Mr Xi Jinping, announced at the “Belt and Road Forum for International Cooperation” that the “China International Import Expo” would be held, starting 2018. This event will open up many opportunities for Portuguese-speaking Countries, including Portugal, to boost their exports to China.

The Permanent Secretariat of Forum Macao will continue to serve as a bridge between companies from Mainland China, Macao and Portugal on trade and production capacity cooperation, as well as continue to hold business matching and economic and trade meetings, thus support the business sector in exploring trade opportunities.

During the Meeting and trade exchange cocktail, four cooperation projects were signed, as well as 16 business matching sessions were held.